I can hear the cries from non-Listerine users who are afraid to use it.

“Wah! Wah! I can’t handle Listerine because it burns! I’m a little wuss, that can’t handle anything and I need my mommy to hold my hand, or else I’m going to cry like a little baby.”

“Oh, woe is me, I can handle the burn of vodka down my throat, the wailing of Michael Bolton in my ears, but I can’t handle Listerine in my mouth.”

When I was growing up, the kids on the playground had names for weaklings who couldn’t handle things like the burning sensation of Listerine. Those names included, “scaredy cat,” “the first one out in dodgeball,” “pussy,” and “Marvo.”

Sure, I didn’t like the burn of Listerine, but I sucked it up, grew some balls, and got used to it. That’s how it is with Listerine, people eventually get used to the pain. Although I will admit that this technique doesn’t work with everything, like watching Jay Leno.

Now thanks to the less intense Vanilla Mint Listerine, weaklings can use this Listerine to kill germs that cause bad breath, plaque, and the gum disease Gingivitis, without it feeling like they’ve just made out with Courtney Love’s cigarette or Courtney Love herself.

One of the great things about the original Listerine – and its various minty forms – was that intense burning sensation, which felt like it not only killed the germs that caused bad breath, but also a few tastebuds and saliva glands. 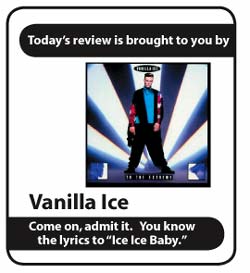 The burn is the indicator that lets you know it’s working. The more it burns, I feel the harder it’s working. Honestly, if you found yourself one morning next to a strobelight honey or a beer goggle prince, wouldn’t you want something that has the power to disinfect regret and get rid of the taste of whatever you put your mouth on and around.

I think only the full-burning sensation of Listerine, and its equally intense minty counterparts, could provide that type of cleansing. Oh, alcohol would work as well, but the danger of alcohol would be drinking too much of it, ending up in bed the next morning with another strobelight honey or beer goggle prince, and repeating the Circle of Shame.

The less intense Vanilla Mint Listerine was mintalicious, but not very vanillalicious. Its very light vanilla flavor made me wonder why Listerine bothered to put it there in the first place. The Crest Whitening Expressions Refreshing Vanilla Mint I reviewed was much more vanilly.

Anyway, the bottom line is that if you’re a wuss, then the Vanilla Mint Listerine is better for your weak ass mouth.

Item: Vanilla Mint Listerine
Purchased Price: $3.54 (8.5-ounces)
Purchased At: The-Superstore-Behemoth-Which-Must-Not-Be-Named
Rating: 3 out of 5
Pros: Mintalicious. Less intense for wusses. Kills germs that cause bad breath, plaque, and the gum disease Gingivitis.
Cons: Not vanillalicious. Not intense enough for extreme people. Making up adjectives. Always being the first one out in dodgeball. Strobelight honeys. Beer goggle princes. Circle of Shame.