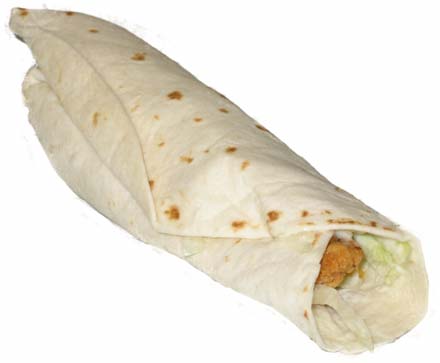 Are your young, hyperactive, and easily-influenced children singing shouting the lyrics to Wiggles songs over and over again like they were drunk at a kiddie karaoke bar?

Is the fellow movie patron sitting behind you with their feet constantly kicking the back of your chair yelling things at the screen, like “Don’t open that door!” or “Run, bitch! Run!”?

Is an obnoxious, loud-mouthed television or radio political pundit attacking you for either your insane conservative beliefs or demented liberal views?

Are you in the same room as Star Jones and she’s looking at you like you’re a juicy, meaty hamburger she’d want to sink her teeth into?

If any of these things are happening to you, I’d suggest you stick a new McDonald’s Snack Wrap in their mouth. Not only will it shut them up for about two minutes, or in Star Jones’ case prevent her from eating you, they’ll also be enjoying a gosh darn tasty snack.

The McDonald’s Snack Wrap consists simply of crispy chicken, cheddar jack cheese, lettuce and ranch sauce wrapped in a soft flour tortilla. The ranch sauce made it pretty tasty and the chicken was surprisingly crispy.

Its cylindrical shape is perfect for stuffing into the mouths of those who won’t shut up. Or it can be used by Britney Spears as Sean Preston’s pacifier when she can’t find her usual pacifier for him…A Taco Bell soft taco.

The McDonald’s Snack Wrap is kind of small, but I think it’s just as filling as a double cheeseburger from the Dollar Menu. Also, at $1.29, it’s inexpensive and I expect a lot of five dollar hookers will take advantage of that cheap price.

Sure, the five dollar hookers could get the cheaper double cheeseburger, but I’m sure they’re tired of having meat in their mouths and would like to have something different.

Being inexpensive can also make up for its lack of size. Obviously, if the McDonald’s Snack Wrap was bigger, it would be awesometastic and be able to shut someone up for a longer amount of time.

However, because it’s so cheap, buying two of them would double the amount of time I could keep Anna Nicole Smith from talking, because no good can come from anything that comes out of her mouth.

So if you buy one McDonald’s Snack Wrap, consider it a snack. Buy two or three, then it’s a meal. Buy four or five, it’s a meal for two. Buy one billion and it’s time to buy some McDonald’s stock.

Item: McDonald’s Snack Wrap
Price: $1.29
Purchased at: McDonald’s
Rating: 8 out of 10
Pros: Inexpensive. It’s gosh darn tasty, thanks to the ranch dressing. Great way to shut someone up for about two minutes. Chicken was actually crispy. Great for five dollar hookers who are tired of having meat in their mouths.
Cons: Kind of small, but what do you expect for $1.29. The Wiggles. People yelling at the screen during a movie. Insane political pundits. A hungry Star Jones.