(Editor’s Note: Please do not attempt this at home. I am a professional stupid person. The Impulsive Buy will not be responsible for any accidents, injuries, deaths, or gum in hair due to attempting this stupid act.)

You would think that after deep throating a banana for a review, I would be able to easily stick in my mouth the sixty pieces of gum in an Eclipse Spearmint Gum BigEPack. Unfortunately, it wasn’t easy.

Originally, I thought I would pop a piece of gum into my mouth one by one each minute like I was Rush Limbaugh with painkillers. Unfortunately, after ten minutes of popping gum into my mouth, I wasn’t feeling very well.

I spit out the ten pieces of chewed gum and drank some water. The cool liquid surprisingly burned my throat a little. I think the excessive minty flavor of all that gum was probably the reason for that. My slightly burnt throat kind of freaked me out, but at the same time I knew my breath was extremely minty fresh and I wished I had a beautiful woman to make out with…as long as she didn’t try to stick her tongue down my throat, because that might burn a little.

Instead, I had to settle for my pillow.

Giving up my quest to chew an entire container of the Eclipse Spearmint Gum BigEPak was something that crossed my mind, but I’m not a quitter. I may be a wuss, I may own a pink striped shirt, I may not have had the balls to ask out the hot girl at work out on a date until it was too late because I didn’t want to be the rebound guy, and I may listen to Harry Connick Jr., but I’m not a quitter.

The following night, I decided to finish the rest of the gum, but took a different approach. Instead of popping one piece after another, I decided to chew five at a time. Then when it’s well chewed I would place it in a bowl to chew on later, then put five more pieces of gum into my mouth. I would repeat the process until all the gum was gone. 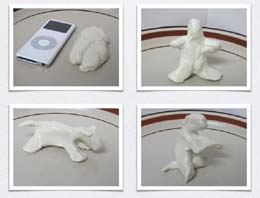 But even this process was like I was running in a marathon, I may be in pain and I really want to stop, but it’ll be so sweet when I cross the finish line. Actually, I have no idea what it’s like to run a marathon, half-marathon, quarter-marathon, or even make a run for the border for Taco Bell.

Eventually, I was able to get through all fifty pieces and form a giant wad of gum, which you can see in the picture above. The wad was roughly the size of my iPod nano, but I was able to stick the whole thing in my mouth. With so much gum, I couldn’t blow bubbles with it, but since it was so large, there was enough gum to form objects and I could’ve made a holiday claymation special with the sticky and slimy Play-Doh-like substance.

While chewing on the huge wad and thinking of what my chewing gum claymation special would be about, all the minty goodness from the gum made me nauseous so I spit it out and threw it away. Or the nauseous feeling could’ve been from all of those pictures of Britney’s crotch I was viewing while chewing the gum.