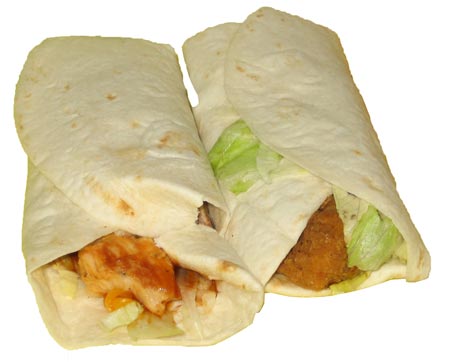 But unlike the James Bond movies, which are somewhat limited by the number of novels written by Ian Fleming and other authors, the expansion of the McDonald’s Snack Wrap is almost endless. Stuffed with either crispy or grilled all-white chicken breast meat, shredded lettuce and cheese, and a spicy sweet sauce, the McDonald’s Chipotle BBQ Snack Wrap continues the evolution of this affordable burrito wannabe.

You could say about the Snack Wrap that McDonald’s is not only just lovin’ it, they’re also just milkin’ it. Slowly but surely, as they keep adding new sauces, Snack Wraps will reach a rare level of diversity that only Beanie Babies and Pokemon have accomplished, but unlike those two, Snack Wraps have horrible resale value on eBay.

But for now there are only three McDonald’s Snack Wrap flavors available nationwide, and if you’ve tried all three, congratulations, you’ve completed the Snack Wrap Gastrointestinal Triple Crown. Your prize? A possible slight raise in high blood pressure and making the lovable purple blob Grimace smile.

If you haven’t had the McDonald’s Chipotle BBQ Snack Wrap, I’d suggest you try it, because it’s good. Although, I personally think the ranch dressing version of it is the best flavor. The sauce itself tasted like any barbecue sauce with a little spice and it meshed well with the crispy version, but not so much with the grilled one.

As someone who prefers to get my tongue kicked by spices so hard that I cry like a Miss USA contestant after she’s announced as the winner or sweat like someone trapped in a Geo Metro with Spongebob Squarepants and Urkel from Family Matters, I was hoping that the chipotle sauce would’ve been hotter. But if you’re a lightweight when it comes to spices, I’d suggest passing on this particular Snack Wrap because there is a little burn.

Item: McDonald’s Chipotle BBQ Snack Wrap
Price: $1.49 each
Purchased at: McDonald’s
Rating: 3 out of 5
Pros: Good. Crispy tastes better. Sean Connery as James Bond. Making Grimace smile.
Cons: Kind of small. Sauce not spicy enough for me. Grilled is not as good as crispy. Nutritional values are snack-like. Timothy Dalton as James Bond. Being trapped in a Geo Metro with Spongebob and Urkel.