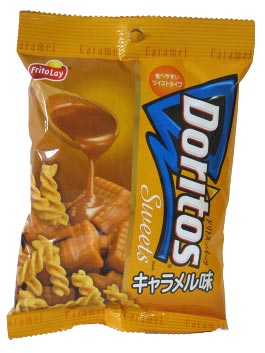 Whenever I purchase or receive a product that on the outside seems like it’s going to make me cringe, like finding an Adam’s apple on a blind date I met through Craigslist, I try to prepare for it the best I can. After receiving the Caramel Doritos Sweets from Japan, I went into full preparation mode, getting all my senses ready for what I felt was going to be gag worthy. It’s the same thing I did before trying the Pepsi Cucumber Ice.

To prepare my sense of touch, I plunged both arms into a bucket of ice. To get my sight ready, I stared at Tara Reid bikini pictures, which if you see them, you will know that it is 100 percent less sexy than it sounds.

To prepare my hearing, I listened to my poor attempts at becoming a turntablist during my high school years, scratching the 45 RPM record single for Crowded House’s “Don’t Dream It’s Over.”

I prepared my sense of smell by making a three-bean chili, giving it all to a hungry homeless dude, and standing downwind from him. To prepare the sense of taste, I punished my tongue with a whip that came with the non-sanctioned Ken & Barbie Malibu After Dark S&M set with real leather that I bought in the Mature Audiences section of eBay.

While lashing my tongue with the small whip, I wondered if Japanese companies use things like prototypes, focus groups, or common sense when coming up with new food products. They have a tendency to make items that seem like something consumers don’t want, like breaded meat without the meat in bar form.

After my senses were prepared for the Caramel Doritos Sweets, I slowly opened the bag and a slightly sickly sweet aroma billowed out of it. “That smell is not a good sign,” I thought to myself as I peered into the packaging.

The Doritos inside didn’t look like the triangle-shaped Doritos that most people know and love. Instead they looked like small screw bits, which is appropriate, since this flavor seems like Frito-Lay Japan is screwing with us.

With all the preparation I did, I was ready for its taste to be unsurprisingly horrible, just like going ass-to-mouth, but it ended up tasting like slightly sweetened Fritos corn chips. The combination of sweet and salty was good with this crunchy snack, but I didn’t think its flavor was caramel-ish, it seemed more pancake syrup-ish.

Preparing my senses for a possibly bad tasting product was unnecessary this time. I got lucky with the Caramel Doritos Sweets, which is a tasty original product. I wish I could say the same for my Craigslist blind dates. Maybe I should stop looking in the Misc Romance section.

(Editor’s Note: Thanks to Impulsive Buy reader Melbatoast for sending me a bag of Caramel Doritos Sweets from Japan. If she ever wants a Wendy’s Baconator, I’ll be glad to send it to her, although it probably won’t be edible by the time she gets it.)