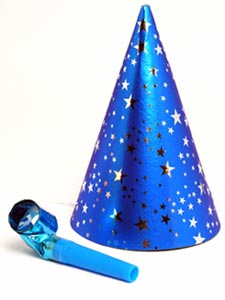 One year ago today, the first ever review was posted here at the Impulsive Buy, which was for the almost drinkable Natural Citrus Listerine. Since then, the Impulsive Buy has posted 217 product reviews. However, 212 of them suck.

It’s been a fun and interesting year here at the Impulsive Buy. Over the past year, I’ve shown a video of me stripping, ate salads for a week, deep throated a banana, removed all the hair on my legs, ate vomit jelly beans, attempted to consume the entire McDonald’s Dollar Menu in one sitting, and outed Lucky the Leprechaun.

But I guess I should be glad I didn’t eat these.

I’d like to thank all of you who come by on a regular basis to read whatever crazy nonsense I write. I hope that I’ve entertained you, educated you, and saved you some money. I promise that I will continue to write nonsense, be your guinea pig, and shove things down my throat that I shouldn’t.

Okay, okay. I know I said that for the 100th review prize drawing, but this one will be even better.

Three lucky readers will each receive one mystery box containing various products the Impulsive Buy has reviewed over the past year. The contents of each box will vary. For example, one may have the diarrhea cha-cha-cha inducing Ruffles Light Potato Chips and another may not.

To enter the Impulsive Buy’s First Anniversary Prize Drawing, just leave a comment for THIS post with whatever you want to say. Please make sure you fill out the email field because I’ll be emailing the winners for their mailing addresses. Donâ€™t worry about the shipping, Iâ€™ll take care of it.

The Impulsive Buy will start accepting entries for the drawing on Tuesday, August 9, 2005 and stop accepting entries on Sunday, August 14, 2005. Only one entry allowed per person. The drawing is ONLY open to those in the United States and US Military APOs. (I apologize to the rest of the world, but shipping the mystery box to anywhere else would be REALLY expensive.)

When the entries and whipped cream are mixed well enough, the mixture will be equally divided into the three aluminum pie pans. I will stick a candle into one of the whipped cream pies, light it, blow it out, and then remove the candle.

Then, with my hands behind my back, I will pull out an entry from each of the three whipped cream pies, using only my mouth. Those three entries I pull will be the three winners of the Impulsive Buy’s First Anniversary Prize Drawing.