I once e-mailed Jelly Belly about making an Advil flavored jelly bean.

You know that sugary coating the orange Advils have for three seconds? That.

Needless to say, they never got back to me. Apparently dirt and dog food are acceptable flavors, but nooooo, not Advil.

I guess I just figured the innovators over at Jelly Belly might be open to some outside ideas. Then again, I found out they were hard at work mimicking Krispy Kreme donuts and I immediately let it slide.

Krispy Kreme is a treat. I don’t have one nearby so I envy anyone who can stop in and pick up a dozen whenever they want. I usually have to wait until I hop a train to NYC to get my fix, but they’ve never let me down. Now you’re telling me they’re teaming up with “THE original gourmet jelly bean?” I’m in.

Here are my quick reviews of the five flavors included in the Jelly Belly-Krispy Kreme mix:

Cinnamon Apple Filled – Beige with brown – These tasted like apple pie. The taste starts as a normal sweet apple Jelly Belly, but is soon met with a dulling cinnamon flavor.

Strawberry Iced – Pink with a little sheen – These tasted just like strawberry cake icing. Unlike a normal strawberry flavor, it’s not very acidic or fruity.

Glazed Blueberry Cake – Basically a darker shade of the Cinnamon Apple – These tasted like a complex blueberry muffin. I got “baked goods” in this more than the others. They were definitely the “donutiest,” which is absolutely a word. Don’t bother looking it up.

Chocolate Iced with Sprinkles – Brown with a few sprinkle dots – These tasted like what I recall Chocolate Pudding Jelly Belly beans tasting like. I might actually say they were “Fudgsicle” flavored.

And now, it’s time for the Krispy Kreme staple. The bean you’ve all been waiting for:

Original Glazed – Color and sheen match the donut – These were really disappointing. Wow. I just didn’t get much here. I realize glaze is essentially just sugar, but that’s all I tasted – sugar. Maybe they slipped some Advil beans in for me instead? I didn’t really find them distinctly Krispy Kreme donut. I wanted to be immediately reminded of a hot conveyer belt glazed, but I got more of a toasted marshmallow vibe. I feel like I’m wrong, but I gotta trust my buds. What did I miss?

I can’t believe it.

Despite my clamoring for the sugary Advil, this mix got cloying in time. I appreciate the larger Jelly Belly variety boxes because you can counter flavors like this with say a citrusy fruit flavor. You need that balance if you wanna consume mass beanage – which is also absolutely a word.

As far as the “donut” of it all, I popped all five at once and found that brought a lot of the pastry effect out.

You might wanna wait to see if these break into the bigger mixes before dropping $5 on this box.

Purchased Price: $5.00
Size: 4.25 oz.
Purchased at: Five Below
Rating: 6 out of 10
Pros: Some cool new flavors to add to the roster. Blueberry was really good. Unless they say “Bertie Bott’s,” Jelly Belly never really disappoints. Delicious Advil coating.
Cons: The baffling Glazed flavor making me question my taste buds. Lack of fresh glazed donut flavor. I prefer a Jelly Belly mix with a little more variety. No Krispy Kreme near my house. A little pricy.

Hoverboard gangs roam the streets. Star Wars Episode XXI: The Force Earns Its Pension is a hit at the box office. The elderly President Gosling has just been elected to a historic 4th term with his smoldering campaign slogan, “Hey girl. I heard you like economic reform.”

Oh, and all food now comes in capsule form.

That’s right, as you head to your favorite breakfast joint, “House of Dancakes,” you notice how the hip, happenin’, and blissfully ignorant youth pop pills of scrambled eggs and bacon, with no memory of the days before society was encapsulated. Heaving a nostalgic sigh, you lock eyes with the owner. With a knowing look, he begins to spin you a tale: “Let me tell you how this whole journey began…”

It’s 2015 once more, and Jelly Belly Pancakes & Maple Syrup Jelly Beans are the brand’s latest attempt to squish the taste of all of your favorite foods into an artificially flavored, vaguely legume-shaped snack. Released on 4/22 to celebrate National Jelly Bean Day (only coincidentally close to 4/20, right Jelly Belly?), the beans contain all the ingredients that grandma used to use in her homemade flapjacks, like “Yellow 5 & 6, Confectioner’s Glaze, and Caranauba Wax.”

The back of the homespun, gingham packaging reads like something out of a sexy lumberjack romance novel — I think I grew a beard just reading it. Tearing open the packaging, I’m immediately slapped in the nose with a strong and recognizable maple syrup scent. The shiny, mahogany beans beckon, so I dive in.

Popping one in my mouth, that iconic maple taste hits fast. It’s certainly more artificial than genuine—think Mrs. Buttersworth, not Grade A Vermont Dark Amber—but the accuracy of Jelly Belly’s flavor reenactment is charming just the same. However, unlike real maple syrup, the flavor doesn’t linger for more than a few seconds. After fading, I’m left chewing an entirely different-tasting bean. This “after-bean” really echoes the “Pancake” part of the product’s name: doughy, with just a hint of butter flavoring.

I take a whole handful to experience that brief ecstasy of maple taste again, but as the cake flavor returns, I’m left regretting it. I hesitate to use the word “mouthfeel” (it sounds clichéd and a bit…uncomfortable), but eating these beans for long just feels weird. Like chewing a pancake that was way undercooked, the grit of the beans contrast unpleasantly with my mind’s expectation of a fluffy flapjack. I think Jelly Belly’s problem here is the fading maple flavor. If they could have made it last, the whole experience could have been more enjoyable. Wishing to test this, I went all out.

Dousing my beans in the dark, sticky nectar of the maple gods, I ate a syrupy spoonful, and what I tasted made me instinctually bellow “Oh, Canadaaaa” across my empty kitchen. An extra kick of maple coupled wonderfully with those buttery undertones, and I was left with what the beans should’ve tasted like. But unless you want your life to become a sugar-fueled parody of Hollywood’s darkest addiction films (Grainspotting? Requiem for a Crème? Fine, I’ll stop), I really can’t recommend trying this. Okay, maybe just once. Then you can stop cold turkey. I promise.

For what they are, these jelly beans are little more than clever novelties. Like the “fireworks” of jelly bean flavors, they’re worth buying a small bag to enjoy the fleeting entertainment. Just make sure no one gets hurt in the process.

Though I must applaud Jelly Belly all the same for trying something progressive. Jolly good show, ol’ bean, and may I soon see the day when even “Braised Sirloin Tips with Steamed Broccoli” is available in cute little niblets. 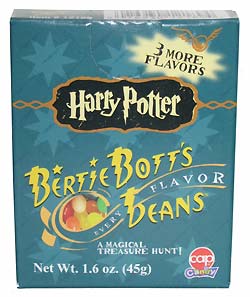