The Mango Orange Peach Jamba Juicie seems like it is supposed to give buyers the opportunity to experience Jamba Juice whenever they want, but I feel that fruity experience goes beyond what’s sucked through a straw.

Despite the front of the bottle clearly stating it has mango, orange, and peach, if you look at the ingredients list, there is also white grape, banana, and pineapple. Why so secretive about those other fruits? Who knows? But even if they weren’t so unforthcoming, sticking all of the fruits prominently on the front of the bottle would be a graphic designer’s nightmare equivalent to being forced to run the latest version of Photoshop with only 125 megabytes of RAM.

With all of those fruits in there, you would expect an explosion of fruity flavors that would make Barney Rubble stop stealing Fred’s Fruity Pebbles, but the only fruits I could really taste were the peach and orange. Its flavor was decent, but not being able to taste the mango, which I love for its taste and aphrodisiac abilities, was disappointing. Although the smoothie’s texture was slightly creamy, it didn’t come close to the thick, icy goodness of blended smoothies. Also, normal Jamba Juice smoothies are a really good source for vitamins and minerals, but the Jamba Juicie wasn’t.

However, there were two things that the Mango Orange Peach Jamba Juicie had in common with most regular Jamba Juice smoothies. First, it comes with a fiber boost, which provides a nice five grams of dietary fiber. Secondly, like most Jamba Juice drinks, it’s kind of pricey at $3.49 for 12.5 ounces.

Overall, I’m not impressed with Jamba Juice’s attempt at pre-mixed drinks. It may work for Starbucks, but the Jamba Juicie isn’t so juicy. (Get it? Ha! I. Am. So. Lame.) So if you have a hankering for a Jamba Juice smoothie, I suggest you skip the Jamba Juicie and get the real thing.

Item: Mango Orange Peach Jamba Juicie
Price: $3.49
Size: 12.5 ounces
Purchased at: Safeway
Rating: 5 out of 10
Pros: Decent tasting. Fat free. Fiber boost provides 5 grams of dietary fiber. Uses non-fat milk. Extra fruits added. Getting to wear a t-shirt and jeans at work.
Cons: Jamba Juicie isn’t so juicy. Pricey for what you get. Couldn’t taste the mango. Not high in vitamins and minerals as regular Jamba Juice smoothies. Texture was like slightly creamy, but not close to an actual smoothie. Running Photoshop with only 125 megabytes of RAM.

The boost thingy has like stuff you’d find in energy drinks, like green tea, guarananana and like ginseng, but it doesn’t come in some lamers can. Like the only things that like should be in a can are like canned food going to the food bank and like Oscar the Grouch. There’s like also an Energy boost thingy with lots of Vitamins B6 and B12. With all those vitamins it’s like they totally threw in some Flintstones vitamins.

Along with the 3G Charger and Energy boost thingies, the Jamba Juice 3G Energizer contains raspberries, strawberries, lemonade, passionfruit-mango juice, lime sherbet, and orange sherbet. When I read it had passionfruit, I like asked the Jamba Juice person if it was one of those like a-fro-dee-zee-ack thingies. The Jamba Juice blender jockey like looked at me like I was stupid or something. OMG! Whatever! Total hater!

Anyhoo, I like wanted to totally like this, because the color was cute and it was kind of yummers, but OMG, there were like seeds like everywhere and I was like totally not having any fun. Seeds were like crunchy and like getting stuck between my teeth. OMG! Hello, it’s like supposed to be a smoothie and go down smooth, not a smoothie sometimes and go down not so smooth. It was like a total bummers.

OMG, while I was drinking the Jamba Juice 3G Energizer, I felt like I was that Duracell Bunny that like keeps going and going. While I was walking around the mall with it, it like gave me the energy to climb the stairs instead of climbing the escalator and like when I was pulling clothes to try on, the store worker came up to me and asked me if she could like take the clothes I had in my hands and put them in a dressing room, but because of the energy from the smoothie, I totally told her that I’d hold on to them.

Item: Jamba Juice 3G Energizer
Price: $4.69 (24-ounces)
Purchased at: Jamba Juice
Rating: 7 out of 10
Pros: Good. Really sweet. Lemonade is the dominant flavor. Nice boost of energy. 120 milligrams of sweet, sweet caffeine.
Cons: Too many damn seeds. Not too smooth for a smoothie. Too many damn likes in this review. Lots of sugar. Being a dorkzilla. The insane abundance of energy drinks.

Listen to the audio version 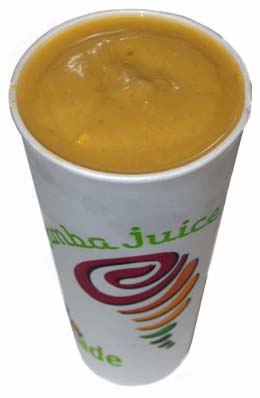 Just like closing your eyes to get beyond the extremely crooked teeth, unevenly drawn in eyebrows, and mysterious boils on the skin of the troll you’re getting it on with, closing your eyes while sucking on the new Jamba Juice Tahiti Green Tea smoothie will help you experience it beyond its color, which as you can see from the picture is possibly the same color as a cat’s diarrhea after drinking lots of egg nog.

Once you go beyond its color, you will find out that the Tahiti Green Tea smoothie is quite delicious and possibly one of the tastiest ways to get green tea antioxidants, which is one of the most popular health supplements out there.

The Tahiti Green Tea smoothie’s combination of green tea powder, mango, lemonade, orange juice, orange sherbet, nonfat frozen yogurt, ice, and extremely loud Jamba Juice blenders creates a concoction that I’ll be buying a lot of since I’m tired of my usual means of green tea consumption, which involves dipping a tea bag into a mug of hot water for two to four minutes and giggling to myself as thoughts of teabagging circle my immature head.

I really do like green tea, although it isn’t my favorite tea name to say — which is oolong tea. I drink it for its health benefits, caffeine content, and it allows me to do something Asian other than using chopsticks, eating sushi, watching anime, driving a Toyota, and taking something the United States invented and making it better.

Mango is the dominant flavor in the Tahiti Green Tea smoothie and the texture of it is slightly mango-ish. The green tea flavor is very light and there is a slight sourness from the lemonade.

That’s less caffeine than a can of Coke. It’s a nice amount if you’re trying to wean yourself off of the stimulant and it might be enough to kill an ant, but it’s not enough to get me through two pages of the Old English poem Beowulf or two minutes of anything with Ryan Seacrest in it.

But I like the Tahiti Green Tea smoothie so much that I’ll drink it for the antioxidants and great taste and then follow it up with a Red Bull chaser for the caffeine.

Item: Jamba Juice Tahiti Green Tea
Price: $4.72 (Original size)
Purchased at: Jamba Juice
Rating: 4 out of 5
Pros: Green tea antioxidants. Very tasty. Mango-ey. Low fat. Saying oolong. Contains 100 percent of your recommended daily allowance of awesometasticness.
Cons: Doesn’t look green. Looks like a cat’s diarrhea after drinking too much egg nog. Entire review consisted of only 15 sentences. Only 30 milligrams of caffeine. Just like having sex with trolls, drinking one is much better with your eyes closed. My inability to relay sarcasm with words without blatantly pointing it out. Reading Beowulf. 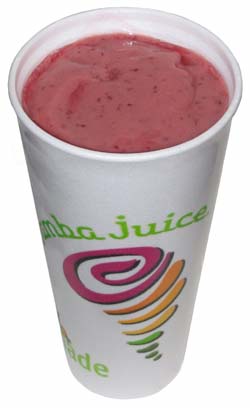 I hate to admit this, but I have a terrible fear of Starbucks.

So instead of Starbucks, I end up at Jamba Juice, with its brightly colored decor, which makes you feel like you’re either inside of a rainbow, in an Old Navy advertisement, or you’ve been staring at a tie-dye shirt for too long.

I believe the unofficial slogan of Jamba Juice is, “All of the same prices and weird cup size names as Starbucks, but without the coffee-smelling farts.”

During my most recent trip to Jamba Juice, I noticed that they were offering their holiday flavors, Orange Cherry Cheer and Mighty Cherry Charger.

I picked up an Orange Cherry Cheer, with its cherries, freshly-squeezed orange juice, orange sherbet, soymilk and nonfat frozen yogurt. I decided to get it because I felt the brightly colored decor of the Jamba Juice didn’t make me cheery enough.

Also, in order to get in touch with my feminine side, I added a Femme Boost to my smoothie, which according to the Jamba Juice website:

Jambaâ€™s Femme Boost combines folic acid to support a healthy nervous system, calcium for strong bones, iron for healthy blood, magnesium to support a healthy heartbeat, and hormone-balancing herbs & extracts to keep you cheery all year long. As an added bonus, soy isoflavones are blended in to support reproductive health and comfort, especially during and after menopause. So power up with Jambaâ€™s Femme Boost and let your girl power prevail!

The first thing I noticed about the Orange Cherry Cheer was the fact that it had more orange than cherry, but it had more cherry than cheer. Even with the hormone-balancing herbs & extracts in the Femme Boost, I still didn’t feel very cheery.

Maybe I wasn’t so cheery because I was picking chunks of cherry seeds off of my tongue much like how I would probably have to pick off pubic hair after going down on a hairy Hungarian hooker.

Despite the chunks of cherry seeds, I liked the taste of the Orange Cherry Cheer, it was kind of Orange Julius-ish. (I dare you to say Julius-ish five times in a row really fast.) Plus, no coffee-smelling farts.

(Editor’s Note: Here are a couple of things you can do to have fun with Jamba Juice employees. (1) When ordering, talk REALLY fast and be very fidgety, then ask if you can add an Energy Boost to your purchase, and then say, “I’ve been feeling really sluggish today.” (2) When the cashier asks you for your name, use different names every time. Mix it up. Use names of the opposite sex. Use foreign names. Use names with more than five syllables. Use names without any vowels. Be creative.)

Item: Jamba Juice Orange Cherry Cheer
Purchase Price: $4.55 (Original Size)
Rating: 3.5 out of 5
Pros: Tasty. Orangy. Telling the Jamba Juice employee that your name is Rico Suave. No coffee-smelling farts. Femme Boost helped me get in touch with my feminine side.
Cons: Not so cheery. Chunks of cherry seeds. Weird cup size names. Starbucks will soon swallow the Earth.