Dipping a chicken patty into a sauce like you’re trying to get it to admit it’s a witch sounds like a great way to ensure there’s flavor in every bite, such is the case with the new Wendy’s Flavor-Dipped Chicken Sandwiches, but a sauce soaked piece of chicken is also a spectacular way to ruin an $80 shirt from Banana Republic or hide your mistress’ lipstick stain on your collar from your girlfriend/wife.

The Flavor-Dipped Chicken Sandwich comes in two flavors: BBQ and Buffalo. The BBQ version also consists of onions and pickles inside a bun, while the Buffalo version is also made up of lettuce, tomatoes, and a blue cheese sauce in between a bun. While both mostly have different ingredients, they have one thing in common — both are extremely fucking messy. After eating one, my hands were covered in enough sauce that it looked like I was the one who sensually massaged the sauce onto the chicken patty. A napkin was not enough to clean the mess, I needed a shower. Okay, I’m exaggerating a little bit, but I did use enough napkins to make an Ent cry.

The chicken patties for both sandwiches may have gotten dipped in sauce like a nerd’s head in a toilet, but the flavors weren’t as strong as I thought it would be. The BBQ sauce wasn’t very tangy and the Buffalo sauce wasn’t as spicy as Hooters wings. Although, the Buffalo sandwich might not have been too spicy because of the blue cheese sauce, which I didn’t even know it had until I researched the sandwich on the Wendy’s website. The pickles and onions in the BBQ version of the sandwich definitely enhanced its flavor and gave it a little more crunch, while the lettuce and tomatoes in the Buffalo one will allow some people to proclaim they had vegetables today.

Overall, both sandwiches were decent tasting, but I really expected more out of them, not only in taste, but also in size. These sandwiches weren’t very big, but I reckoned them to be because I paid almost five bucks for each of them. Apparently, not only is gas an expensive liquid, but so are BBQ and Buffalo sauces. So I guess I’d better hoard the stuff whenever I order Chicken McNuggets and scrape it off my $80 Banana Republic shirt whenever I spill some on it.

Item: Wendy’s Flavor-Dipped Chicken Sandwiches (BBQ & Buffalo)
Price: $4.69 each
Purchased at: Wendy’s
Rating: 6 out of 10 (BBQ)
Rating: 6 out of 10 (Buffalo)
Pros: Decent tasting. Lots of sauce. BBQ one is “healthier” than Buffalo version. Wonderful source of protein. Pickles and onions in BBQ version. Lettuce and tomatoes are vegetables.
Cons: Flavors weren’t as strong as I expected for something that’s dipped in sauce. BBQ sauce wasn’t very tangy and Buffalo sauce wasn’t very spicy. Blue cheese sauce wasn’t very noticeable. Pricey for what you get. Extremely fucking messy. Making Ents cry. Wonderful source of sodium. Ruining an $80 Banana Republic shirt with sauce. Excessive napkin use. Trying to get a piece of chicken to admit it’s a witch.

After all the rejected advances on women, Fs on my college report cards, cancellation of all the shows Tom Cavanagh has been in, and not achieving my dream of being the The Village People’s leatherman because I could not properly make the letter “C” with my arms, I should be used to disappointment by now. But I am again deeply disappointed by the Wendy’s Spicy Baconator.

I thought the Spicy Baconator would be just as good as the original Wendy’s Baconator with its two hamburger patties, six small strips of bacon, jalapenos, two slices of pepper jack cheese, and chipotle ranch sauce. The jalapenos add a decent amount of heat to the burger, but don’t add any flavor. It’s like Charo without the “Cuchi-Cuchi.”

Wait. Was that too old of a reference?

Anyhoo, without the jalapenos, the burger was pretty bland, not even the chipotle ranch sauce or the bacon could save it, which was disappointing since bacon can usually save anything. Just ask slightly wilted salads, overcooked baked potatoes, and people being chased by cougars or Kirstie Alley.

Oh disappointment! You rain upon me like tears of a little boy who has had their candy taken from them or who have shared a bed with Michael Jackson.

The Wendy’s Baconator has a name usually reserved for those college students who fully take advantage of the all-you-can-eat breakfast bar in the dormitory cafeteria or the wingmen who takes home the fat chicks.

In this day and age of Ciabatta bread and chipotle peppers, the Baconator’s simplicity is comforting, like freshly baked chocolate chip cookies and milk or nestling my head in between the voluptuous bosom of a woman.

Of course, what’s not comforting about the Baconator is its nutritional values, which makes the Big Mac’s seem small, like a penis after being dunked in the cold water.

With all that meat and its nutritional values, the Baconator is not a burger that you would want to eat often or during your recovery from triple bypass surgery or in the middle of a Weight Watchers meeting or in the lion’s den at a zoo or at a PETA protest. But if you can eat several of these in one sitting, you should be given the nickname, “Baconator-tor.”

Despite its unhealthiness and fugliness in the picture above, the Baconator a pretty good burger. It was smaller than I thought it would be, but it’s a pretty dense burger. As a matter of fact, when I was carrying the paper Wendy’s bag it came in, it kind of felt like it was going to fall through the bottom.

As for its taste, the smokiness from the bacon complimented well with the juicy ground beef patties and the two slices of cheese. The ketchup and mayonnaise added a nice creamy tomato flavor to it. All together, it created a simple, classic taste, like something I would’ve gotten from a drive-in restaurant from the 1950s.

But all is not perfect with this burger. Wendy’s claims the Baconator has six strips of bacon, and it technically does, but those strips were awfully short. I know bacon shrinks significantly when cooked, but it would probably take two or three strips from the Baconator to equal one strip of bacon from a package I bought from the store and fried on my own.

Overall, it’s a really good burger. Although, after eating one, I feel like my lifespan has shortened a little bit. Again, it’s simple with a classic taste, which I really like.

I wish I could say the same for the type of women I like, which is high-maintenance, high heels, and with a high tolerance of me.

Item: Wendy’s Baconator
Price: $6.49 (Small Combo)
Purchased at: Wendy’s
Rating: 8 out of 10
Pros: Simple burger with a classic taste. Heavy burger. Half pound of beef. Freshly baked chocolate chip cookies and milk. Resting my head in between the voluptuous bosom of a woman.
Cons: Six strips of bacon were small. Bad nutritional values that make the Big Mac’s look healthy. 2.5 grams of trans fat. Eating meat at a PETA protest. Eating a Baconator at a Weight Watchers meeting. 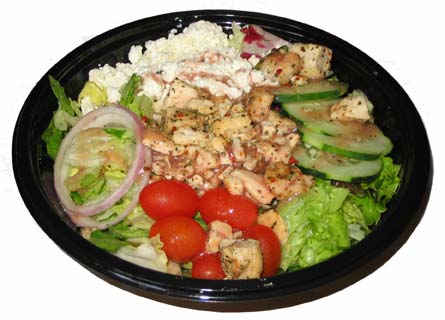