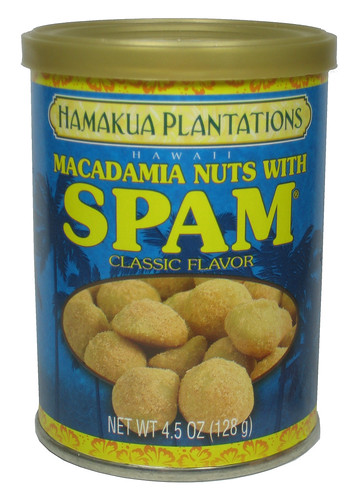 To Hawaii residents, macadamia nuts are like flowers and most of the stuff at Spencer’s, they’re not something they would buy for themselves.

However, that may change thanks to these Macadamia Nuts with SPAM, which combines the canned nut tourists love to buy with the flavor people in the other 49 states don’t understand why Hawaii residents enjoy.

Even for me, someone who enjoys the taste of SPAM, the combination made me scratch my head. When I first saw a picture of the can, I thought it was a heavily Photoshopped creation, like Tara Reid’s recent spread in Playboy. But even when I saw it with my own eyes and held a can in my hand, I still couldn’t quite believe it and thought fake snakes were going to jump out when I opened it.

But that didn’t happen. The only thing that jumped out was the scent of macadamia nuts with a noticeable amount of SPAM. Each nut has a slight pink powdery coating, which makes sense since a SPAM product wouldn’t be one if it didn’t come in the pink hue that even disgusts the pink-loving Hello Kitty.

While looking at them, all I could think about was whether they would be gross, like the Playboy pictorial of former WWF wrestler Chyna, or disappointing, like Olivia Munn’s safe-for-work Playboy photos.

Fortunately, they were neither.

While there’s definitely a SPAM flavor, it’s not overpowering and the combination of the mystery meat and macadamia nuts was surprisingly tasty. While I prefer to have my macadamia nuts dipped in sweet chocolate, the SPAM coating is a good savory option, even though the idea of SPAM in pink powdered form is kind of unsettling, like Marge Simpson posing in Playboy.

But, again, I enjoy the taste of SPAM.

If you don’t like SPAM, you’ll probably avoid these Macadamia Nuts with SPAM, much like how I avoided the issue of Playboy with Heidi Montag on the cover.

Other Macadamia Nuts with SPAM reviews:
The Tasty Island

Item: Macadamia Nuts with SPAM
Price: $4.99
Size: 4.5 ounces
Purchased at: Longs Drugs
Rating: 6 out of 10
Pros: Mystery meat and macadamia nuts are a surprisingly tasty combination. SPAM flavor isn’t overpowering. My knowledge of celebrities who have been in Playboy. The monounsaturated and polyunsaturated fats in macadamia nuts. Makes a great WTF gift. Olivia Munn.
Cons: Not for those who don’t like SPAM. Pink powder on them makes them look a little frightening. Marge Simpson, Chyna and Heidi Montag in Playboy. Olivia Munn’s non-nude Playboy photos. Only available in Hawaii.

I find SPAM Hot Dogs to be intriguing and, at the same time, somewhat disgusting, like watching two animals getting it on at the zoo.

It’s fascinating because despite the fact that SPAM is something that is looked down upon by as many people in this country as the folks who believe Daisy from VH1’s Daisy of Love is a complete skank, Hormel felt the need to create a hot dog-shaped version of their product. But I think a wiener-shaped version of SPAM would only be loved by canned meat fanboys, Hawaii residents, and Daisy from Daisy of Love, because judging by the contestants on her show, she apparently has a thing for made up pieces of meat that look like dicks.

The SPAM Hot Dogs are also somewhat revolting because they look like what I imagine 8 year old boys who visit Michael Jackson get to see. I would show you a picture of it in all of its pinkish glory, but I think the previous sentence set it up so that if you were to see it, you would probably expel something from your mouth and I’m pretty sure getting puke out of your keyboard is something very difficult to do.

While this molded meat product isn’t pretty to look at, neither is the ingredients list, which is made up of: pork, mechanically separated chicken, water, modified potato starch, salt, potassium lactate, sugar, sodium diacetate, sodium ascorbate and sodium nitrate.

The packaging recommends they be either pan fried or grilled until hot. Since Smokey the Bear is sitting in an unmarked van across the street making sure I don’t have any incinerating devices, I’m not able to grill the SPAM Hot Dogs. Pan frying did help a little with the sickly pink color of the product, turning it a little browner. Measuring 4.75 inches long and three-fourths of an inch in diameter, they don’t quite fit in normal hot dogs buns from end to end, just like most hot dogs. But unlike most other hot dogs, they come eight to a pack, which negates the usual “too many hot dogs, not enough hot dog buns, use extra hot dogs as fake walrus teeth” dilemma.

If you care for the salty, WTF taste of SPAM, like I do, you will probably enjoy the SPAM Hot Dogs. Although, I think the SPAM flavor isn’t as strong as the stuff that comes out of the rectangular can. The addition of mustard and ketchup with the bun complimented the wiener quite well, which, at first, I didn’t think would work. However, if you don’t enjoy the canned meat known as SPAM, be glad because one SPAM Hot Dog contains almost 25 percent of your daily recommended intake of saturated fat, which means this shit is not good for you.

But if you do enjoy SPAM, you’ll like these conveniently shaped hot dogs, which allows you to easily consume them at a barbeque or at the zoo while watching two rhinos go at it, because if you can handle SPAM, you can probably handle the sight of that as well.

Item: SPAM Hot Dogs
Price: $3.99
Size: 8-pack
Purchased at: Star Market
Rating: 6 out of 10
Pros: Good if you like the salty, WTF taste of SPAM. Comes in a pack of eight, which is a perfect match for the number of hot dog buns per pack. Ketchup and mustard with a bun compliments the wiener well. Watching two animals getting it on at the zoo.
Cons: Bad if you don’t like SPAM. SPAM flavor doesn’t seem as strong as stuff that comes in a can. Not pretty to look at, if you have Jacko’s wiener in your head. One hot dog contains 25% of saturated fat. Sodium nitrate. Giving Daisy her own show. Watching two animals getting it on at the zoo.