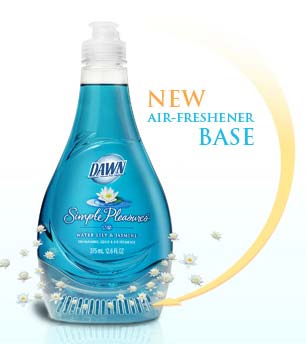 Remember when Palmolive dishwashing soap was advertised to soften hands while you did the dishes? That was pretty much the extent of multitasking dishwashing detergents. All the others were just one trick ponies, because they were only good for washing dishes.

However, that has changed a little thanks to the new Dawn Simple Pleasures, which has an air freshener in the base of the bottle to help keep your kitchen smelling fresh and grease fighting Dawn detergent on top to give your kids a chore to do to teach them about responsibility, while you sit on the couch and watch TV.

Waterproof beads in the bottom compartment release appealing scents that cover your bad cooking or the flatulence caused by your bad cooking. It comes in three scents: Apple & Pear, Water Lily & Jasmine, and Lemon & Tangerine

I could see the Dawn Simple Pleasures as a bachelor’s dream, covering the stank caused by a few weeks worth of dishes in the sink. Of course, the bachelor’s rule of dishwashing is, “If it don’t stink, just leave it in the sink.” But thanks to the Dawn Simple Pleasures and its stank covering abilities, the rule may not need apply anymore or it may need a slight rewrite.

Perhaps, “If your plates have roaches scuttlin’, then it’s time to do some scrubbin’.”