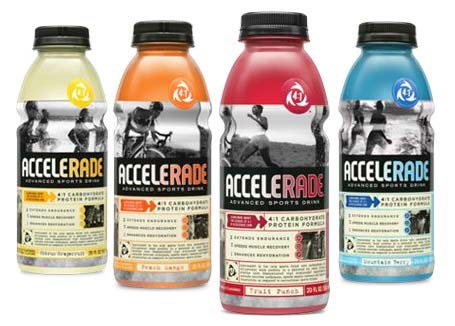 Apparently everyone back in the day at Gatorade wasn’t drinking Gatorade to replenish their fluids, because their dehydration prevented them from realizing they should’ve patented the suffix -ade. They would be richer than they are right now, because they could’ve gotten some major royalties from the other -ades.

So what makes Accelerade different than the other -ades?

According to its website, it’s the first sports drink to contain carbohydrates and protein in a patented 4:1 ratio, which is just the right amount of protein to optimize the absorption of fluid. Patented, eh? It seems like Accelerade has been drinking the Accelerade.

The 4:1 ratio of carbs to protein may seem fine for dehydration, but such a high ratio of carbs might upset Dr. Atkins so much that he’ll release another Atkins diet book from beyond the grave, sort of like what Tupac has done with his last several albums.

Accelerade comes in four flavors: Citrus Grapefruit, Peach Mango, Fruit Punch and Mountain Berry. They’re available at participating 7-Eleven stores, but none of the 7-Elevens I buy my high fructose corn syrup-filled products from has them in stock.

17 thoughts to “NEWS: Why Must All Sports Drinks End With The Suffix -ade?”