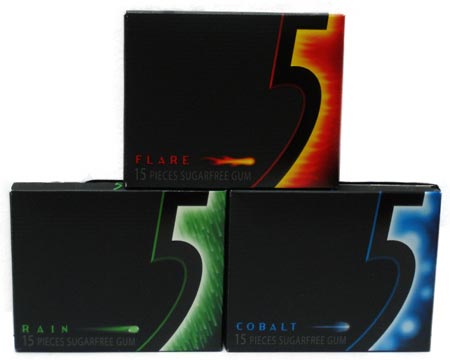 The new Wrigley’s 5 gum is being marketed to teens, young adults and anyone else who looks like they belong in the audience for MTV’s TRL.

I’m sure Wrigley’s is hoping that this new sugar-free gum becomes a trend among this valuable age demographic, but I don’t think their public relations people, who sent me three boxes of Wrigley’s 5 gum to review, realized that sending me those samples will probably kill any chance of it becoming popular, because I’m the Grim Reaper when it comes to trends. When I use or do something that’s considered trendy, popular or cool, I unintentionally kill it with my scythe of uncoolness.

It’s like when William Hung sings a song, he ruins it forever. I can’t dance to the Ricky Martin song “She Bangs” anymore because of him.

Speaking of dancing, I have stopped the popularity of so many dance moves that I am not allowed to be on or around a dance floor. I killed the Macarena, The Bangles “Walk Like An Egyptian” dance, Riverdancing, the Electric Slide and whatever that dance Flavor Flav does in Public Enemy music videos.

There was supposed to be a third Breakin’ breakdancing movie called Breakin’ 3: Pop and Lock With Me, but that was cancelled thanks to me and my attempts to do the Worm.

Sure, trends aren’t meant to last forever, but I have the ability to give them an earlier death than the trend hoped for, which helps ensure them a place in a future VH1 retrospective special. You’d think someone out there would thank me for this curse, especially those who used to wear fanny packs or clothing that came in neon fluorescent colors and those who drank Zima, but I haven’t gotten a thank you card or an A&E Biography about me.

So by chewing the Wrigley’s 5 gum I’ve already made it uncool, much like how I killed the phrase, “Fo’ shizzle, ma nizzle” and ruined the Rachel hairstyle made popular by Jennifer Aniston during her Friends days. I probably even ruined the product’s marketing slogan, “5 is the new black,” even though I’m not quite sure what it means. To be honest, its name sounds like something very random that was either pulled out of a hat or pointed to on a refrigerator with a magnetic poetry kit by someone who was blindfolded or an extremely inebriated Britney Spears.

Each pack of Wrigley’s 5 gum has 15 sticks and there are only three flavors: Cobalt, Rain and Flare, which is “cool speak” for peppermint, spearmint and cinnamon, and is now no longer cool because I mentioned it. Its slim, black packaging looks trendy and fits well in the front pocket of my jeans, but because I think it’s trendy, it’s no longer trendy.

If you’ve had any spearmint, peppermint or cinnamon gum from Wrigley’s, you probably won’t notice much of a difference with the Wrigley’s 5. It’s like listening to the Nickelback songs “How You Remind Me” and “Someday.” The intensity of each flavor isn’t as strong as their regular Wrigley’s counterparts, but each stick lasted surprisingly long, like a piece of Extra gum.

Overall, Wrigley’s 5 gum is good, but doesn’t seem like it’s anything innovative.

Although, all of that doesn’t really matter since I already killed any chance of it being popular by chewing it. It’s much like how I stopped the spread of Converse Chuck Taylor All-Star shoes, Starter jackets, the 7-Up “Up Yours” green t-shirts, Slap bracelets, acid washed jeans, Where’s Waldo? books, Members Only jackets, and Techno music.

(Editor’s Note: Brian at the Candy Addict also received free samples of Wrigley’s 5 gum. You can read his review here.)

Item: Wrigley’s 5 Gum
Price: FREE
Purchased at: Received from nice people at a PR firm
Rating: 3 out of 5
Pros: If you like other peppermint, spearmint or cinnamon gum from Wrigley’s, you’ll probably like these. 15 sticks of gum. Nice packaging and its slim shape makes it easier to slip in my jeans front pocket. Long lasting flavor. Stopping the popularity of fanny packs, bright florescent clothes and Zima.
Cons: Not anything innovative. Product name seems kind of random. My ability to kill trends. No A&E Biography about me. Acid washed jeans. An extremely inebriated Britney Spears, because you might end up married to her.