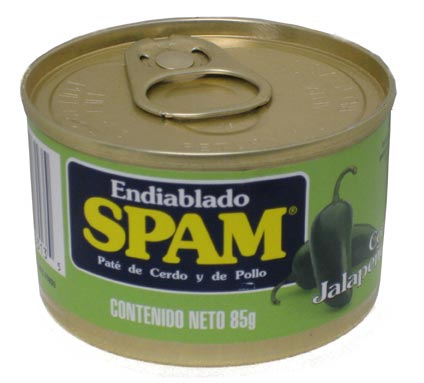 “You’re going to eat me, aren’t you?” Marvo heard in an tiny accented voice as he grabbed the can of Jalapeño SPAM from the cupboard.

Marvo thought to himself, “Did this can just talk?”

He examined the small can in his hands, which his friend from Seattle picked up while on vacation in Mexico and gave to him when he visited her for Thanksgiving. He shook the can hoping to make it say something, but didn’t get a response. Thinking it was probably just his imagination, he reached for the pull tab on the top of the can, using his fingernail to help get under it.

Just as he was about to pull the tab, he heard a voice scream, “NOOOOO!”

The scream startled Marvo, causing him to drop the can of Jalapeño SPAM onto the floor making a low thud. He didn’t immediately pick it up, instead he nudged it several times with his foot, hoping to get some kind of feedback from it, like an “ow” or “Damn, you need to wash your feet!” Throwing the can away crossed Marvo’s mind, but he couldn’t let a perfectly good can of meat be wasted like that, so he picked it up, placed it on his kitchen counter, and decided to save it for another day.

As he turned around, he heard something say, “Thank you for not eating me.”

Marvo froze in his tracks, then turned back towards the can of Jalapeño SPAM and gathered what little sanity he had left and asked the can, “Are you talking to me, little can?”

It was silent for a moment and then it said, “I know being eaten will eventually be my fate, but will you grant me one wish before you eat me?”

The can didn’t have a mouth, but somehow it was communicating with him. Marvo pinched himself to make sure he wasn’t dreaming. Then he splashed cold water on his face. Then he pulled out a locked box from a kitchen drawer, punched in the lock’s combination code 1134, opened it and took out a paparazzi photo of pre-surgery Star Jones in a string bikini. Marvo was definitely awake.

“You know, I’m not a genie or the Make-A-Wish Foundation, so I don’t think can grant you anything great, like a million dollars, a beautiful trophy wife or the opportunity to sit shotgun in a NASCAR car during a race,” said Marvo. “Probably the best thing I could get you is a lap dance.”

“No, my wish is simple,” said the can of SPAM. “I have lived a lucky life as a can of SPAM, my journey has taken me from the store shelves of Mexico to the Starbucks saturated streets of Seattle, and now I find myself in the islands of Hawaii. All I ask is that you show me around your beautiful territory.”

“Um, you know Hawaii isn’t a territory and it’s the 50th state of the United States, right?” Marvo asked.

“Oh, I didn’t know that,” the Jalapeño SPAM replied. “I thought Hawaii was a U.S. territory, like Guam or the Virgin Islands. Well I shall keep that little nugget in my head the next time I play Trivial Pursuit or if I end up on Who Wants to Be a Millionaire. Anyhoo, will you grant me my wish?”

Marvo took a deep breath, closed his eyes and thought about how lame it would be to be a tour guide for a small can of SPAM, but decided to meet the canned meat’s request. “Tomorrow, I’ll take you around the island and show you the sights, but when we come back I’m going to fry you in a skillet,” said Marvo.

The next day Marvo and his new companion set out on their sightseeing trip around the island of Oahu.

“You sure do speak English well for someone who was born and raised in Mexico,” said Marvo.

“I learned by watching television,” said the Jalapeño SPAM. “Lots of the Discovery Channel, ESPN, Food Network, and American Idol. I also learned a lot from reading the issues of Playboy under your mattress. There are some great articles in every issue.”

“That’s what I keep telling everyone,” said Marvo. “I don’t buy it for the beautiful airbrushed photos of nude women, I buy them for the well written articles.”

The first place Marvo took the can of Jalapeño SPAM was to Oahu’s famous North Shore. There he showed the can of SPAM all the great surfing spots, watching surfers from shore and scoring bad wipeouts. Then he treated the SPAM to Matsumoto’s Shave Ice and gave it brain freeze.

“I heard that SPAM is a delicacy here,” said the Jalapeño SPAM in between bites of its strawberry/vanilla/banana shave ice. “I heard that people from other states would rather use cans of SPAM as paper weights or door stops than eat it.”

“Well I wouldn’t call it a ‘delicacy,’ but we probably do consume more of it than any other state,” said Marvo.

When the evening came about, Marvo took the can of Jalapeño SPAM to the world-famous Waikiki. Marvo told his companion that it should count the number of ABC Stores they pass by. The can of SPAM shined with delight as it watched the street performers, looked at all the cheesy crap available at The International Market Place and played a game with Marvo called, “Guess Which Hooker is Really a Dude?”

“Well I guess we should be heading back,” an exhausted Marvo said. “It’s pretty late and I have to fry you up and then eat you. I don’t like to eat too late because I usually have nightmares when I do.”

“Yes, I must meet my fate,” said the SPAM. “I would like to thank you for granting me my one wish. Is there any way I can repay you for your hospitality?”

“Well, I’m going to eat you, so I’m pretty sure that will make us even,” Marvo replied.

When they got home, Marvo pulled out a skillet from the a closet and placed it on the electric stove, turning its knob to medium heat. “Can I have one more small wish, Marvo?” asked the Jalapeño SPAM. “Once you open my pull top lid, I will forget everything I have experienced and pass on. So please let me enjoy those memories for just a bit more.”

Marvo nodded and went to grab a plate and fork. When he returned to the can of SPAM, he gently place his fingers on top of it and the SPAM said, “I am ready, my friend.”

The words “my friend” rang through Marvo’s ears and caused his hands to shake as he reached for the can’s pull top tab with his fingers. He took a deep breath and then pull the tab towards him. A crack and the release of pressured air filled the room.

Marvo stood there almost motionless, except for his trembling hands. Then after taking another deep breath, he pulled the top off of the can. He looked down into the small can of Jalapeño SPAM, the light smell of jalapeno emitted from it. It didn’t look like the dense pink SPAM that he was used to that could easily be cut into strips and chunks. Instead it was like deviled ham spread or wet cat food with small bits of jalapeno in it. Marvo took the can and plopped its contents onto the skillet, causing a sizzling sound. He placed the empty can on the kitchen counter.

He fried it for several minutes and then placed the heated meat product on a plate. After letting it cool a bit, he picked some up with a fork and put it in his mouth. Marvo slowly began chewing and it tasted all right. He noticed that it didn’t taste like the SPAM he was used to, although that could’ve been because of the mild jalapeno flavor. 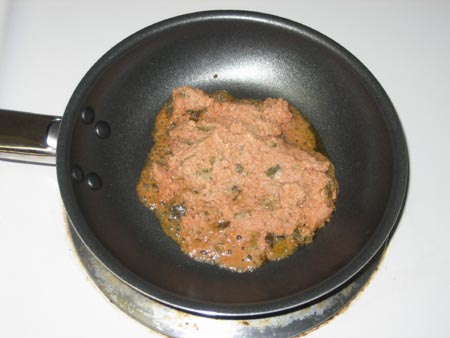 Marvo decided to turn on the television and after watching a Proactiv commercial, the Friends theme song began to play. While the line, “So no one told you life was going to be this way” was being sung, tears began streaming down Marvo’s face. He was chewing on his friend and felt horrible about it.

He ate half of the plate before he threw the rest down the sink out of remorse and the fact that the Jalapeño SPAM was frickin’ salty. Marvo ran into his bedroom and cried himself to sleep.

The next morning Marvo woke up with Jalapeño SPAM breath and scolded himself for eating right before bedtime, since it usually caused him to have weird dreams. He wondered whether all of that time spent with the can of Jalapeño SPAM was just a weird dream.

When Marvo walked into his kitchen, he noticed a note on the counter next to the empty can of Jalapeño SPAM he left there overnight. It read, “I counted 36 ABC Stores in Waikiki. I thought Starbucks was bad.”

Item: Jalapeño SPAM
Price: FREE (3 ounces)
Purchased at: Received from friend
Rating: 2 out of 5
Pros: Mild jalapeno flavor. 11.5 grams of protein. Playing “Guess Which Hooker Is Really a Dude?”
Cons: Not dense like the SPAM I’m used to. Doesn’t taste like the SPAM I’m used to. Frickin’ salty (840 milligrams per can). Very small can. Looks like wet cat food. Number of ABC Stores in Waikiki. Eating before going to sleep. Only available in Mexico. Eating a friend.