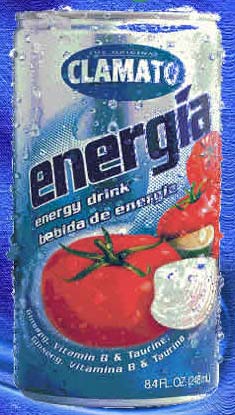 I’ve never had a Clamato in my life, but I’m going to assume that the new Clamato Energia energy drink is possibly the worst energy drink idea EVER.

Sure, it’s got the usual ginseng, guarana, and taurine found in other energy drinks, but the reconstituted tomato juice concentrate mixed with reconstituted dried clam broth in the Clamato itself makes it as appealing as combing the armpit hairs of a juiced up Eastern European female bodybuilder with a voice that sounds like James Earl Jones.

Of course, being the masochistic bastard that I am, I would totally try the Clamato Energia…and possibly comb the armpit hairs of an Eastern European female bodybuilder on steroids. Although I’m allergic to shellfish, so drinking one may cause me to get hives or pass out.

Perhaps one of the more frightening things about the Clamato Energia is the possibility that it might be a gateway drink to even worse beverages, such as anything that contestants on Fear Factor would drink for $50,000 or an O’Doul’s.