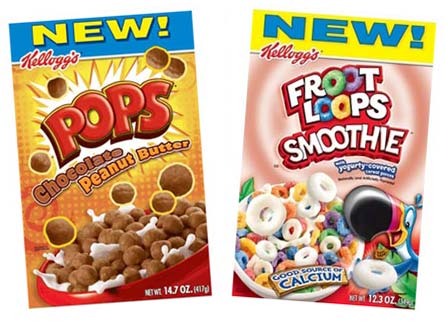 Pops (or Corn Pops for you purists) is one of the sagging elder statesmen in the world of breakfast cereals, along with other old farts like grumpy Apple Jacks and senile Frosted Flakes. Throughout its 50-plus year history, the only thing that has been modified about Pops is its name, which has changed more times than Lew Alcindor, but significantly less times than Prince.

Until now, there has never been a cereal spin-off of Pops, unlike Frosted Flakes, which has spread itself so thin that it has spawned way too many bastard cereals that get discontinued. Perhaps with the introduction of the new Kellogg’s Pops Chocolate Peanut Butter, it will finally make me say, “Oooh, I gotta have my Pops,” except without sarcasm, like I usually do when they have to eat those plain yellow balls.

Another cereal recently brought out by Kellogg’s is the new Froot Loops Smoothie, which includes yogurt-covered pieces of Froot Loops mixed with the usual multi-colored fruity rings of sugary goodness, which I recently found out don’t count towards the 3-5 servings of fruit and vegetables I should eat each day.

I’m actually looking forward to Froot Loops Smoothie because it will expand my choices of fruity cereals to eat for breakfast and to use for my cereal necklace making business.