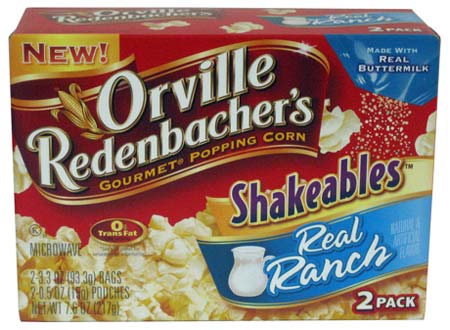 When did making microwave popcorn become so complex, like with the Orville Redenbacher’s Real Ranch Shakeables?

For years, the instructions for microwave popcorn were simple, just like the steps for using the Ronco Showtime Rotisserie Grill or the video camera used to record your personal sex tape with your spouse, significant other, or some random person from the club, which you promise to erase later — just set it and forget it. When it’s done, just pop it out and enjoy it, or in the case of the sex tape, use it also for blackmail or possible internet stardom.

Today, there are microwave popcorn with added steps. With the Orville Redenbacher’s Shakeables, after the popcorn is done in the microwave, the instructions say that I have to stick it in a bowl, sprinkle on the powder from the separate Ranch flavor pouch, cover the bowl, and then shake the bowl to evenly mix the seasoning with the popcorn.

I don’t have time for these extra steps. If I wanted popcorn that involved that much pain, I would go to the closest movie theater, purchase a nine dollar ticket, buy a bag of five dollar popcorn, stick the popcorn in a muzzle, lock my arms and legs to the theater chair using chains and padlocks, and then force myself to watch Larry the Cable Guy in Delta Farce.

I’m not being lazy. Laziness is not wanting to go outside and mow the lawn or being stuck on a recliner, flipping channels, ending up on a Dora the Explorer marathon, accidently dropping the remote, unsuccessfully attempting to reach the remote without moving anything below your arms, then giving up and for the next six hours you help Dora with her quests, while occasionally reaching for the remote, hoping that your arm has grown slightly within the past 45 minutes.

It’s just that these added steps take away the convenience of microwave popcorn. We don’t need no stinkin’ bowl. That’s what the bag is for. The bag is the bowl. As for adding the seasoning and shaking a bowl, if I want to shake something I’ll make my way to a dance floor and shake my thang until the break of dawn. With regular butter microwave popcorn, I don’t have to add the butter, so why do I have to add the Ranch seasoning? If we have the technology to make microwave popcorn, the iPhone, and sex dolls that look real, I’m pretty sure we also have the technological know-how to add ranch flavor to the popcorn pre-popped.

Despite the extra work it takes to prepare the Orville Redenbacher’s Real Ranch Shakeables, it does taste good and has a strong ranch flavor, which reminds me of most ranch-flavored potato chips. Some people might think that the flavor is too powerful, so for those people I would recommend using less of the flavor pouch. The shaking of the seasoning in the bowl did create an even distribution of flavor, but I think that could also be accomplished using the popcorn bag instead.

So if you like microwave popcorn with a twist and are willing to do some dishwashing and low-impact shaking to get that twist, the Orville Redenbacher’s Shakeables might just be for you.

Item: Orville Redenbacher’s Real Ranch Shakeables
Price: $3.00 (on sale)
Purchased at: Safeway
Rating: 3 out of 5
Pros: Good flavor. Strong ranch flavor, similar to ranch-flavored potato chips. Zero trans fat. Made with real buttermilk. The ability to add as much or as little flavor as you want. Set it and forget it. Popcorn is a good source of fiber.
Cons: Only two salty bags. Having added steps to microwave popcorn. Delta Farce. Using a sex tape as blackmail. Being lazy enough to sit through a Dora the Explorer marathon. Shaking my thang on any dance floor.