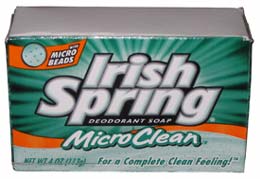 They were once considered the King of the Shower, dominating the personal care aisle at stores, coming in dozens of brands, sizes, and scents. We thought so well of bars of soap, that we used to give them as gifts to people in either in the shapes of fish or on a rope. They were also once seen as goods to be taken from hotel rooms, along with the small bottles of shampoo and conditioner, and the occasional towel or ashtray.

However, bars of soap now have been reduced to a small section on the bottom shelf at stores and have been replaced by dozens of liquid body washes. They are also left behind in the hotel room, like the used condom in the trash and the Bible and the phone books in the nightstand.

Itâ€™s been years since Iâ€™ve used a bar of soap, but when I used them, my soaps of choice were Ivory and Irish Spring.

Ivory was a good soap because it was dirt cheap and Ivory claimed it was 100 percent pure. Their proof that it was pure was the fact bars of Ivory soap floated, like angels in the sky. Of course, this canâ€™t be true because if Tara Reid were on a raft, she would still be a drunken tramp.

I also used Irish Spring because I loved the scent of it. Every time I took a shower, I would close my eyes and imagine being in Ireland during the spring, surrounded by leprechauns and four-leaf clovers, with the smell of Irish Spring in the air. Of course, later I found out that Irish Spring was just as Irish as Lucky Charms cereal.

Recently, I got to reexperience what itâ€™s like to use a bar of soap again, thanks to the new Irish Spring MicroClean.

The Irish Spring MicroClean looks and smells very similar to the original Irish Spring, except it has these MicroBeads in the bar, which are supposed to exfoliate the skin.

Unfortunately, the MicroBeads felt like they werenâ€™t doing their job. It felt like a really, really fine piece of sandpaper that had been heavily used to strip the paint off of a bicycle. My loofah does a better job of exfoliating, because it feels like itâ€™s actually ripping off my epidermis.

Even on my most sensitive parts, like my hairy nipples, I couldnâ€™t really feel the MicroBeads. However, I did feel clean, but what soap doesnâ€™t make you feel that way.
Another thing that bothered me about the soap was the sticky soap film, which I shouldâ€™ve remembered from my previous years of using bars of soap. I guess Iâ€™m just so used to the slippery soap film that I get from using moisturizing body washes

Just stick one on a plate, leave it anywhere in the bathroom, and let the Irish Spring goodness spread throughout the room.

I think Iâ€™m going to stick a bar in my car.