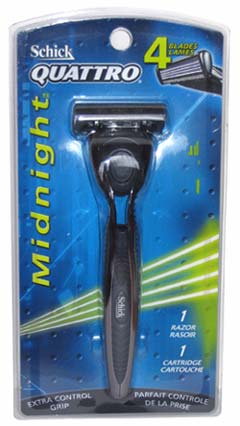 Shaving. Iâ€™ve been doing it since I was thirteen years old.

I donâ€™t know if I had more hormones than other boys my age or if Iâ€™m older than I believe am, like some professional baseball players from Cuba, but what I do know is when I grow out my facial hair, I look like either the Missing Link or Robin Williamsâ€™ chest.

Ever since college Iâ€™ve been using my trusty Gillette Mach3 razor and it has served me well over the years. The Mach3 razor, which was the first triple-blade razor ever, was the first non-disposable razor I ever used.

It was great for the first few months. Shaves were much closer and more comfortable than the crappy disposable razors. Then I ran out of razor cartridges and shortly after that I found out how frickinâ€™ expensive replacement cartridges were. It seemed like Gillette grabbed my Mach3 razor, pointed the handle at me, and then screwed me with it.

However, the shaves were great, so I kept buying the replacement razor cartridges, like a crack addict.

Being the cheap bastard that I am, I try to make each razor cartridge last a month. I do this by shaving my face every other day, not shaving my face on the weekends, shaving my chest once a month, and shaving my…Um…No wait, that would be waaay too much information.

Recently, long-time Impulsive Buy reader Goldberry asked if Iâ€™d be interested in a free Schick Quattro Midnight razor sample she received. Again, being the cheap bastard I am and my desire to have something new happen in my lonely life, I told Goldberry Iâ€™d review it.

About two weeks later, the razor arrived in my mailbox and I almost instantly put it to the test. I planned for the razorâ€™s arrival by not shaving for three days, and I looked like a bum.

After my face was properly lathered up, I took my first stroke with the Quattro. The first stroke I took surprised me because it didnâ€™t pull on any of the long hairs like my Mach3 razor does. The protective wires that run perpendicular to the blades might have had something to do with that.

When I was done, I felt like it shaved just as well as my Mach3 razor did. Although I will admit, it was a more comfortable shave.

Despite the comfortable shave, I had some problems with the Quattro. It was hard to even out my Elvis sideburns because the head of the Quattro is slightly bigger than the head of my Mach3 and I wasnâ€™t used to its size. Also, the longer hairs would get clogged in between the blades. Dipping it in water, rinsing it under running water, or constant verbal abuse couldnâ€™t get the hairs out.

However, I did eventually get the hair out by running my fingers masochistically down the blades several times.

Mmm…The feel of cold metal on my skin. Itâ€™s intoxicating.

Anyway, a day later I shaved with the Quattro again, except with much easier stubble. It plowed through my sexy Brad Pitt-stubble just as easily as my Mach3 could and this time there wasnâ€™t any clogging.

Overall I was pleased with the Quattro. It gave me a shave just as good as my Mach3, but did it more comfortably.

Will it replace my Mach3?

Iâ€™m not sure because the price for the Quattroâ€™s replacement razor cartridges is slightly more expensive than the Mach3â€™s. Well I guess that makes sense, since the handle of the Quattro is slightly thicker, which means itâ€™s a little more uncomfortable when Iâ€™m getting screwed with it.

(Editorâ€™s Note: Our fellow reviewers at The Message Whore also reviewed the Schick Quattro Midnight awhile back. Their review was much less favorable. You can read their review here.)

Item: Schick Quattro Midnight
Purchase Price: FREE (Thanks Goldberry!)
Rating: 3.5 out of 5
Pros: Four frickinâ€™ blades. More comfortable shave than my Gillette Mach3. The feel of cold metal.
Cons: Longer hairs will become clogged in between blades. With four blades, it shaves just as close as my Gillette Mach3. Being screwed by razor companies.