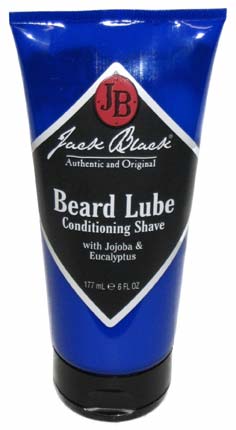 For those who don’t know, I grow facial hair significantly faster than it takes for a new reality show to pop up on television. I usually shave everyday, but sometimes I like to have fun with my fast growing facial hair.

For example, I’ll grow my beard out for about four months, part my hair, put on a pair of glasses, throw on a sweater vest, pretend I’m a Fullbright scholar, eat nothing but bread for a week, and after that week is over, I’ll comb my beard to see how many crumbs and other things it has collected.

Or sometimes I like to grow my goatee REALLY long, gently stroke it, and say in an evil tone, “Soon the whole world will be mine. Muahaha. Muahaha.”

Like I said before, I usually shave everyday, and for the past three weeks I’ve been using the Jack Black Beard Lube. It’s a combination of pre-shave oil, shaving cream, and skin conditioner, which is good because instead of three different containers for each product, you get one product that contains all three.

The Jack Black Beard Lube isn’t like any other shaving cream or gel I’ve used. Perhaps the major difference is the fact that it doesn’t foam like regular shaving gels and creams.

The color of it is white, but it goes on clear, like you’re putting on a moisturizer or KY Jelly. This is handy if you want to be able to see where you’re shaving, but sucks when you want to use the foam to pretend you’re Santa Claus or Papa Smurf.

Shaving with the Jack Black Beard Lube feels different than shaving with another gel or cream because of the lack of foam, but it did create a nice comfortable, lubricated shave. However, it didn’t give me the bikini-oil-wrestling-match-type of lubrication that I got with the Art of Shaving Sandalwood Shaving Cream, which I reviewed at the beginning of the year.

However, despite not having the bikini-oil-wrestling-match-type of lubrication, the Jack Black Beard Lube did give me a better shave than the ones I’ve gotten from using my usual Edge shaving gel.