This Gillette M3Power Nitro razor is a very talented razor. It vibrates, gives a decent shave, and it danced circles around this other razor I have. Don’t believe me? Watch this video. (Quicktime required)

Oh yeah! You got served, beeyatch!

Oh wait! What am I saying? I got served too. The M3Power Nitro razor outdanced me. But then again, that’s really easy to do because of my limited dancing abilities.

Sorry, I don’t have a video of that dance-off, but even if I did, it would be too embarrassing to show. But if you want to use your imagination, just imagine some Asian guy doing the Roger Rabbit, Cabbage Patch, Running Man, Water Sprinkler, Chicken Dance, and a dance move that involves humping the floor.

Or just watch an old Vanilla Ice music video, because that’s how I learned to dance.

(Note to self: Must buy Darrin’s Dance Grooves video.)

Not only does the M3Power Nitro have dancing skills, it can also dance for a very long time. I’ve been shaving with it almost every day for three weeks, had several dance-offs with it, and the single AAA battery inside is still going strong.

With that kind of stamina, the ladies would love the M3Power Nitro. However, it maybe strong enough for the hair leg warmers of a tree-hugging hippie woman, but it’s made for a man.

When Impulsive Buy reader, Lane, sent me the Gillette M3Power Nitro, I didn’t think it would vibrate as violently as it did. It’s supposed to be gentle micro-pulses that stimulate hair up and away from the skin, but my cell phone vibrates a lot more gently.

At least it doesn’t vibrate as much as Robin Williams on a caffeine or cocaine binge.

Despite my thinking that the M3Power Nitro vibrates a little too violently for something that consists of sharp blades, it does provide a decent and comfortable shave, and I also think the vibrations made cutting through my facial hair easier. Although, I think it shaves just as well as my regular MACH3 Turbo razor. 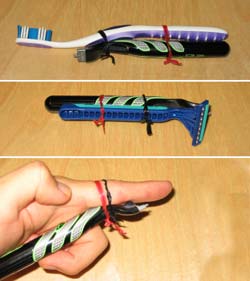 Anyway, like I said earlier, I thought the razor’s vibrations seemed to have helped with my shaving. So because of that, I thought about using the vibrations of the M3Power Nitro to make other things better.

First, I attached the M3Power Nitro to my toothbrush to see if the vibrations would make for a better brushing session.

Then I connected it to a plain ordinary razor to see if it could improve its ability to shave.

Finally, I connected the M3Power Nitro to my finger to see if it could turn my normal finger into a “happy finger,” that could give someone a pleasurable massage. (See picture on left)

Item: Gillette M3Power Nitro
Purchase Price: FREE (given by Impulsive Buy reader Lane)
Rating: 3.5 out of 5
Pros: It’s an awesome dancer. Gives a decent shave. Vibrations help cut through hair easier. AAA battery lasts for a while. Able to use MACH3 and MACH3 Turbo cartridges. Good at spooning.
Cons: I got served. My limited dancing ability. Vibrations seemed a little too violent for something with sharp blades. Its vibrations can’t make other things better.