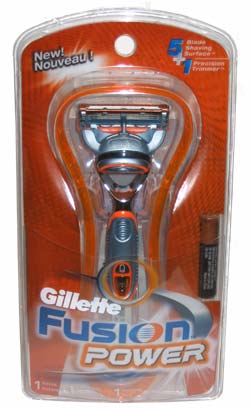 (Editor’s Note: To understand today’s review, you should be familiar with the MTV show Pimp My Ride. If you aren’t, read about it here, then read the review.)

Xzibit: Check this out. When I first saw your razor, Marvo, I wanted to dispose of your disposable razor because it looked like it couldn’t even shave the mustache off of a Russian female weightlifter on steroids. It had only two blades that looked as sharp as a butter knives. Plus, it had that lame blue and seafoam paint job. But the fellas at West Coast Customs turned your butter knife into a samurai sword. Check out your new razor.

(Pulls curtain off of new razor.)

Xzibit: Yo, Grizzly Adams! Get off of me!

Q: Wassup, Marvo. Now the first thing you probably notice about your new razor is the color. We had to get rid of that wack blue and seafoam paint job because it looked depressing. So we hooked you up with a copper and silver paint job, but as you can also see, we put on a lot of chrome.

Q: You’ve got a chrome handle and a chrome neck, so you can always check yourself to see how good you’re looking.

Xzibit: Or see if you’ve got anything between your teeth. Heh, heh.

Q: Now remember how your razor had just two blades that couldn’t put a dent into the dense hairy legs of a mountain hippie. We solved that by taking out your two lame blades and replacing them with FIVE smaller and thinner blades.

Marvo: No way! FIVE BLADES! How did you guys do that?

Q: Also, you know how sometimes it’s hard to even out your sideburns. Well we added a sixth blade on the top of the razor’s head to help you maintain your sideburns. So incase you want to be Elvis, you’ve got the Precision Trimmer to help you. 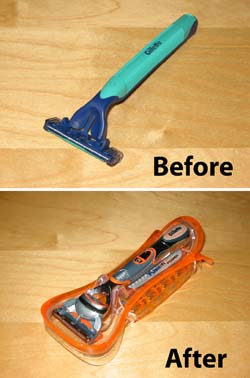 Xzibit: (Impersonating Elvis) Thank you. Thank you very much.

Q: Now Mad Mike’s gonna show you all the crazy electronics we put in your razor.

Mad Mike: That vibrating is actually gentle micro-pulses which will help you get a closer shave by stimulating your hair.

Xzibit: It vibrates? So I guess guys AND girls will like your razor. Heh, heh.

Mad Mike: To make it vibrate we put a battery in your razor. It’s even got a indicator that tells you when your battery is running low.

Xzibit: Now there’s one last thing I want to give you. Because it costs and arm and a leg to buy replacement cartridges for your new razor, I’m going to give you a set of extra razor cartridges.

Marvo: Thanks Xzibit, and thanks West Coast Customs, you guys did an awesome job, but now I have to take this razor for a test spin.

(Marvo heads back home in his beat down Ford Pinto. He pulls up to his apartment where his friends are waiting. Marvo shows them his pimped razor. His friends go wild.)

Random Friend Who Is Pretending To Be Marvo’s Friend Because He Wanted To Be On TV: There’s FIVE BLADES! Oh, I can’t wait for the six blade razor.

Sasquatch: Oh man, I TOTALLY need one of those!

Marvo: Man, getting my razor pimped was the best thing that has ever happened to me, even better than that time I saw John Ritter at our local shopping center. Although, it took some time getting used to my pimped razor because the head of the razor is so big. The Precision Trimmer totally helped with maintaining my sideburns. I definitely think I got a closer and more comfortable shave than with my old blue and seafoam razor, but I think the shaving job was just as good as my other razor. Maybe with my clean shaven face, the women will starts to notice me.

Marvo: Thanks MTV for Pimpin’ My Razor.

Item: Gillette Fusion Power
Purchase Price: $9.94
Rating: 3.5 out of 5
Pros: Close and comfortable shave. Just as good as my Gillette M3Power Nitro. Totally pimped our razor. Shiny. Five frickin’ blades. Precision Trimmer is helpful with sideburns. It frickin’ vibrates. Low battery light indicator. Shower safe.
Cons: Big razor head took some time getting used to. Not backwards compatible with Mach3 cartridges. New cartridges cost an arm and a leg, around $14 for only FOUR of them.