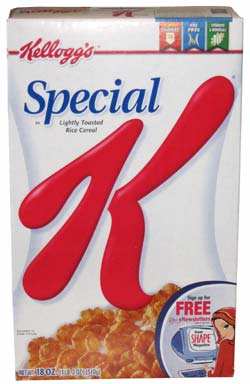 I don’t know how many of you remember the Total Cereal commercial, where the announcer says something like, “It would take 28 bowls of Special K to equal the vitamins and minerals of one bowl of Total.”

Well you know what Mr. Announcer, I don’t need your stinkin’ one bowl of Total Cereal, because I just ate 28 bowls of Special K. How you like me now, beeyatch?

Thanks to those 28 bowls I ate during the Special K Diet, I’m now four pounds lighter, sexier, and I think my man boobs just dropped a cup size. I now can confidently run in “Baywatch slow motion” across a beach and I won’t jiggle…as much.

For those of you who don’t know what the Special K Diet is, it involves eating a bowl of Special K for two meals and a sensible third meal, every day for two weeks. You are allowed to snack on fruit and vegetables in between meals. After those two weeks, you should be about six pounds lighter or drop one pants size.

Although, I really didn’t care about dropping one pants size, since all my pants have either elastic or adjustable waistbands

I think this weight loss will change my life and I’ll be able to do things I could never do when I was four pounds heavier.

I feel like I can jump higher and dunk a basketball…On one of those Nerf basketball rims you stick on top of your door.

I feel like I can talk to any woman…Over instant messaging using the screen name “sxybod” and a fake picture for my icon. (I know. “Sxybod” is probably taken already.)

I feel like I can do a marathon…That involves watching the Lord of the Rings Trilogy on my recliner, while eating potato chips and ice cream.

I feel like I can go to every store, purchase every box of Special K on the shelf, put those boxes in a huge pile, douse the pile in cheap alcohol, and light the sucker on fire, like I’m Guy Montag from the book Fahrenheit 451, because I’m frickin’ sick of Special K.

(Holy crap! What’s with the literary reference? I frickin’ feel like Dennis Miller.)

I now hate Special K more than car alarms that go off for more than 30 minutes and grandma underwear.

After the third day, eating the Special K got really old and I decided to enhance the cereal with chocolate and strawberry milk. That helped me get through the two weeks and the two 18-ounce boxes of Special K.

However, the changes in milk couldn’t help with satisfying my hunger in between meals and my addiction to recording Rachael Ray’s cooking show 30 Minutes Meals, burning each episode to DVD, and cataloging them by the color of the shirt she’s wearing on the show.

Now that I accomplished the Special K Diet and lost weight, I think I should celebrate by eating either a Carl’s Jr. One Pound Double Six Dollar Burger or the Burger King Triple Whopper.

26 thoughts to “The Special K Diet”