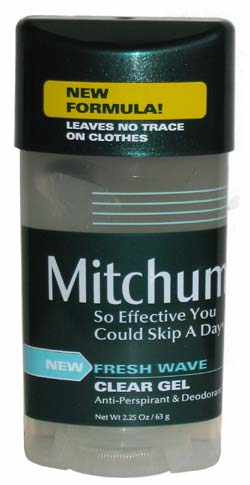 If your only real fear is commitment, youâ€™re a Mitchum Man.

Nope…Women fear committing to me and I fear snakes, women with large Adam’s Apples, and shopping malls with free boy band concerts.

No, I usually dust those onto the floor and then suck them up with my vacuum. However, on several occasions I’ve licked up nacho cheese from my shirt so it wouldn’t stain. Also, I’ve always wanted to eat sushi off of a naked woman.

If you never forget your protection, youâ€™re a Mitchum Man.

I’ve forgotten my protection a few times. Thank goodness I shoot blanks and no child has ever walked up to me and called me “daddy.”â€¨

If they look real enough to you, youâ€™re a Mitchum Man.

Um… Real. Fake. Flat. Perky. Saggy. One nipple pointing towards the sky and the other one pointing to the ground. I’ll take them however I can.

â€¨If you didnâ€™t have anything to do with planning your wedding, youâ€™re a Mitchum Man.

No, I will plan everything for my wedding. I want my wedding ceremony to be on top of a grassy hill, with only close relatives and friends. We will all be lifted there by helicopter. My bride and I will write each other beautiful sonnets (or haiku, if I’m lazy) expressing our love and dedication. Then we will release a hundred white doves into the sky, which will probably take over the native bird population and cause larger bird poop splats on cars.

If you ever fantasized about a hotel maid, youâ€™re a Mitchum Man.â€¨

Um, I don’t know what hotels you go to, but from all the hotels I’ve been to, I have yet to see ONE hot hotel maid or one under the age of 50.

If Menage a Trois is the only french term you know, youâ€™re a Mitchum Man.

I not only know Menage a Trois, I can also count to ten in French, and say “Dans mon pays on utilise le vagin en premier,” which translates to, “In my country itâ€™s customary to try the vagina first.”

Hmm…Well I guess I don’t qualify as a Mitchum Man, but then again I should’ve known, because according to the Village People, I also don’t qualify to be a macho macho man.

Despite not being a Mitchum Man, I’ve been using the Mitchum Fresh Wave Clear Gel Anti-Perspirant & Deodorant for the past few weeks. I don’t usually use anti-perspirants because I like it when my body perspires, because it’s the body’s way of cooling down and the glistening sweat makes me feel like a Chippendale dancer, except without the six-pack abs, bowtie, tight spandex pants, bulging biceps, slick hair, the ability to make women scream, a large package, and choreographed dance moves.

The first thing I noticed about the Fresh Wave Clear Gel was its scent. It has a nice clean and fresh scent, which smells kind of like a cologne. Because it’s a clear gel, Mitchum claims that it will not leave any traces on your clothing. So far, I have yet to see any residue, but then again, the Degree deodorant I used previously also didn’t leave any traces.

Mitchum also claims that because the Fresh Wave Clear Gel is alcohol-free, it won’t sting or irritate my skin. Fortunately, it didn’t sting, but I don’t know of any deodorant that does, except Crabs Deodorant. Unfortunately, it did irritate my skin after a few days of use, causing me to scratch my armpits once in awhile and then smelling them after I was done scratching.

Another problem I had was running out of the product too quickly. Most deodorants last me two or three months, but with the Mitchum Clear Gel, I’m on track to use it all up within a month. Although, I have to admit that might have been my fault since I put on deodorant in the morning and right before I go to bed.

Why do I need to put on deodorant right before I go to sleep? Well, just in case I forget to put some on in the morning or if I meet a hot chick in my dreams.