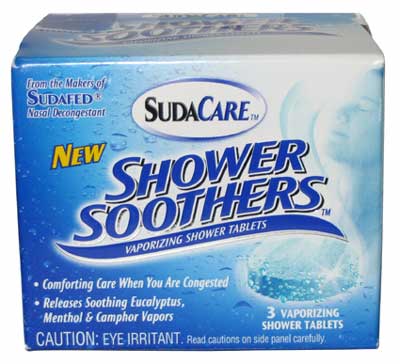 (Editor’s Note: Welcome to Day Two of Cold Week here at the Impulsive Buy. Just to let you know, I was sick at home the other week, hence the cold products to review this week. The product for today’s review was suggested by Impulsive Buy reader, Josh, who was curious to know if today’s product worked after seeing a commercial for it on television.

I also sometimes am curious about a product after seeing its commercial, like those UPS “What can brown do for you?” ads. When I see them I wonder stuff like, “Can brown deliver a pizza to me?” or “Can brown sharpen my pencils?” or “Can brown defeat hot dog eating champion Takeru Kobayashi?”)

Depending on whether you’re hungry or full, each SudaCare Shower Soothers tablet either looks like a gigantic blue Smarties or a big Alka-Seltzer.

However, unlike Smarties and Alka-Seltzer, the Shower Soothers aren’t meant to be consumed orally. Instead they work by using the stream of water from your shower to turn that big blue tablet into soothing vapors of eucalyptus, menthol, and camphor to give you temporary comfort when you’re congested.

It basically can clear your sinuses much like a Halls drop, a bowl of spicy curry, or sitting in the restroom stall next to the Incredible Hulk while he’s taking a crap.

While using the product in the shower, I could smell the eucalyptus, menthol, and camphor vapors, but they weren’t as powerful as I hoped they would be.

A few minutes after stepping out of the shower, there was this warm soothing feeling on my chest and upper back. It felt like someone rubbed Ben Gay on me or like Estelle Getty passed out on top of me after making sweet, sweet love.

Unfortunately, the Shower Soothers didn’t help with my congested nose, congested chest, or my penile dysfunction. I think a Halls drop does a much better job.

The Shower Soothers may have not worked for me, but I think the eucalyptus in it would be great for koalas who want to create a eucalyptus vapor chamber to get high.

Item: SudaCare Shower Soothers
Purchase Price: $5.38 (3-pack)
Rating: 2 out of 5
Pros: Looks like a gigantic blue Smarties. Tablet lasts for about five minutes in the shower. Warm soothing feeling after stepping out of the shower. Eucalyptus might be enjoyed by koalas.
Cons: Faint vapors. A Halls drop can do a better job. Sitting in the stall next to the Incredible Hulk.