Sure, drinking alone is one of the signs of alcoholism, but drinking alone while playing a drinking game that involves watching an episode of Knight Rider is just good ol’ fashioned fun.

(Editor’s Note: For those of you too young to know what Knight Rider is, go read about it here or go purchase a few episodes here. For those of you too lazy to do either, Knight Rider was what started David Hasselhoff’s rise to German superstardom, solidified a place for him in VH1’s I Love the 80s, and it was “A shadowy flight into the dangerous world of a man who does not exist. Michael Knight, a young loner on a crusade to champion the cause of the innocent, the helpless, the powerless, in a world of criminals who operate above the law.”)

Now the vodka would’ve gone great with some chocolate or coffee liqueur, but I didn’t have any. Heck, I didn’t even have any Yoo-Hoo or Nesquik chocolate powder. Instead, by popular demand, I decided to mix the vodka with most of the beverages from the last product election.

The rules I made up for the Knight Rider drinking game were simple.

Every time K.I.T.T.’s front red scanner light is shown, I would have to take a straight shot of Grey Goose La Vanille Vodka. Unfortunately, it had a very slight vanilla scent and tasted like cough syrup. However, it was pretty smooth compared with other vodka I’ve had.

Every time K.I.T.T.’s license plate, which says “KNIGHT,” is shown, I would have to take a shot of Grey Goose La Vanille Vodka mixed with Island Fruit 7-Up Plus, which I decided to name F-Up Plus.

The Island Fruit 7-Up Plus didn’t add any fruity flavor to the vodka, because the vodka’s flavor easily overpowered the weak 7-Up Plus, much like how any woman could make me whipped. 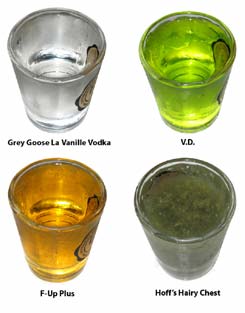 Every time K.I.T.T. uses turbo boost, I would have to take a shot of Grey Goose La Vanille Vodka mixed with Mountain Dew MDX, which I called Vodka Dew, or V.D. for short. The citrus flavor was noticeable in this concoction and was probably the best tasting of them all.

Finally, if any part of David Hasselhoff’s hairy chest is shown, I would have to take a shot of Grey Goose La Vanille Vodka mixed with Odwalla Superfood, which I named Hoff’s Hairy Chest, because if you look at the picture on the left, mixing the two creates a fuzzy concoction, much like Hasselhoff’s chest.

Shooting it felt like a fuzzy Hasselhoff hairball going down my throat, except probably a little sweeter, but still disgusting.

Because of that, I definitely needed to stop, because dying from Hasselhoff’s hairy chest was not the way I would want to go out.

(Editor’s Note: I know. I know. This review was supposed to be done weeks ago, but I’ve learned that it is hard to write while intoxicated, even when trying to channel Ernest Hemmingway’s spirit. To make up for it, go wax David Hasselhoff’s chest here.)

Item: Grey Goose La Vanille Vodka
Purchase Price: $19.99 (750 ml)
Rating: 4 out of 10
Pros: Smooth. Would probably go well with chocolate or coffee liqueur, which I didn’t have. The convenience of purchasing Knight Rider episodes from the iTunes Music Store.
Cons: Tastes like cough syrup. Disappointing for a Grey Goose vodka. The fuzziness of mixing it with Odwalla Superfood. The episode of Knight Rider I chose showed David Hasselhoff’s hairy chest WAAAY too many times. Dying from Hasselhoff’s hairy chest.