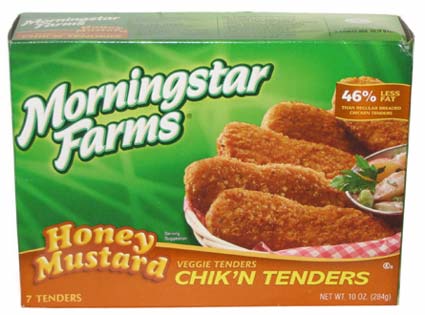 I guess being fake is the new black.

How could you do this to me, Morningstar Farms Honey Mustard Chik’n Tenders?

God, I feel so cheated, bamboozled, conned, deceived, defrauded, duped, finagled, hoodwinked, mislead, screwed, suckered, swindled, victimized, and any other word in the thesaurus that also means to be cheated.

I trusted that you would give me delicious chicken tender goodness in exchange for my three dollars and fifty cents. How was I supposed to know that you were veggie tenders and didn’t contain any “chik’n” at all?

I know it says “veggie tenders” on your box, but I thought the amount of veggies in you were the same amounts of shredded carrots and celery the cafeteria workers at my old grade school would sneak into the meat lasagna to meet USDA school lunch standards.

Also, on top of the lie about you not having any chicken, I later learned that you contained milk and egg ingredients, which really doesn’t make you 100% vegetarian, like your box says. So to vegans, you’re not really 100% vegetarian, you’re just inedible and a liar.

How are my vegan homies supposed to keep it real?

I really feel duped. I feel duped. But more importantly I feel that you betrayed millions of eaters.

After eating a couple of “chik’n” tenders, I decided to eat the rest using a more honest condiment, ketchup, which is made from REAL tomato concentrate.

But that’s not the end of the lies. Here’s another one. You look so crispy on the box, but sticking you in my toaster oven for over twenty minutes at 375 degrees wasn’t even enough to make you crispy.

Also, why do you come with seven “chik’n” tenders? That’s an odd number. Are you going to lie to me and say the 8th piece was actually a chicken tender and because it was a chicken tender, it ran away.

At least you’re slightly healthy, with 7 grams of fat, 13 grams of protein, 4 grams of fiber and 480 mg of sodium in only two pieces. Unless you’re lying about that too.

Besides, even if you did tell me, it would probably be just a lie.