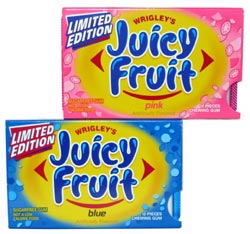 It’s hard to choose which Limited Edition Wrigley’s Juicy Fruit Gum flavor I like best, because the blue and pink flavors are very similar.

They both have juicy AND fruity flavors; both are limited edition; neither comes in the color they’re named after; both have short-lasting flavor; and both have two of the most unoriginal chewing gum flavor names EVER.

Since I can’t decide which one I prefer, I think the best way to figure it out is to have an ol’ fashioned Color-off, which is a competition that involves naming things off of the top of my head that come in either color OR has the color in its name. Then I rate each item as either something positive or negative.

I have to come up with ten items for each color, count the positives, and then the one with the most positives will be the winner.

Pink prime rib…Positive (Unless you like your meat well done, then if that’s the case, go eat something else).

Blue police lights…Positive (Unless you’re wanted for something).

The blue sky…Positive (Unless you’re falling through it without a parachute).

The Blue Lagoon…Positive (Unless you’re a guy and masturbated to the love scenes, which is wrong because Brooke Shields was only 14 years old at the time).

An orangutang in a pink lace ballerina skirt…Positive (Unless it’s throwing its own poop at you).

Pink Floyd…Positive (Unless you think Pink Floyd is the name of an alcoholic drink, because you’re too young to know what Pink Floyd is).

Weezer’s Pinkerton Album…Positive (Unless you hate critically acclaimed albums that didn’t have a lot of record sales).

The Blue Pill from the Matrix…Negative (Unless you like living in ignorance, unaware of reality, and enjoy having a bunch of tubes sticking out of your body in a robotic human growing farm).

Pink Energizer Bunny…Positive (Unless you have a headache).

The TV show Blue Thunder…Positive (Unless you didn’t see any of the episodes during its very short 11 episode run).

Pigs, either alive or in raw bacon form…Positive (Unless you hate mud, the movie Babe, or have heart disease).

Blue Viagra pills…Positive (Unless your erection has lasted longer than five hours).

Damn! That didn’t solve anything.

Anyway, the real winner is Wrigley’s for coming up with a way, albeit an overused way by Hershey’s, to sell gum. Also, the real losers are those of us who bought these packs of Limited Edition Juicy Fruit gum.

The flavors aren’t very special, they don’t last very long, and they have totally unoriginal names, much like boy bands.