It’s one of the staples of the all-you-can-eat dinner buffet, along with soft serve ice cream, a salad bar with your choice of ranch, thousand island, and Italian dressing, soggy corn on the cob, belts that need to be opened up a notch, and smelly, smelly restrooms.

The prime rib stop always holds up the rest of the buffet line, sometimes stopping the buffet traffic all the way back to the cauliflower at the salad bar.

When people see prime rib, they want prime rib, unless they like their meat well done, they’re a member of PETA, or they believe Adam’s rib, which formed the sexy, naked Eve, can be the only thing called “prime rib.”

An all-you-can-eat dinner buffet is usually the only place where people consume prime rib, because cooking a prime rib is not a job for the impatient or really hungry people.

However, thanks to Quiznos, which is probably the easiest 25-point Scrabble word there is using the letters “Q” and “Z,” we can all enjoy prime rib without the “goodness” of a Las Vegas buffet, like long lines or old ladies in motorized carts bumping into you. 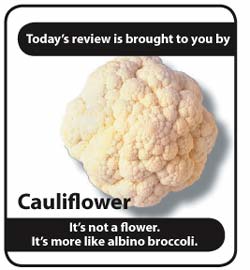 However, just like most good prime rib buffets, the Quiznos Prime Rib Sub was very pricey. A regular-sized prime rib sub, which is about eight inches long, costs about ten dollars.

Too bad it wasn’t all-you-can-eat prime rib subs, because then it would’ve been worth it.