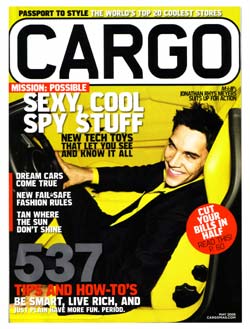 Cargo Magazine was like a quasi-product review blog editor’s Playboy Magazine, because they each contain pictures of things that I will never have – either beautiful, naked, and airbrushed women or overpriced, trendy goods.

Now there’s a “was” near the beginning of the previous sentence because the May 2006 issue of Cargo Magazine was the last issue EVER. It now ceases to exist much just like other magazines I’ve enjoyed over the years, such as Unshaven Hermit Weekly, Obsessive-Compulsive Disorder Cleanliness Magazine, and Gangsta Wannabe Monthly.

Cargo Magazine was also like Playboy because with both magazines, pages sometimes stuck together. Although, with the Cargo Magazine, the reason why they stuck together was because of the sticker tabs that were in every issue, which allowed readers to mark the pages that contained products they could buy, if they were rich or sold one of their kidneys.

What am I going to do now without Cargo Magazine?

Where else can I read about a $500 pair of Italian leather Gucci shoes, $150 corduroy men’s capri shorts, and $100 designer t-shirts? 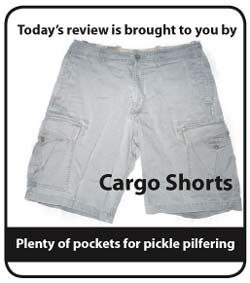 Where else can I learn about a $250,000 sports car which I could buy if I were going through a midlife crisis or needed to compensate for particular physical deficiencies?

How am I going to learn about the latest cell phones that will allow me to have A-Ha’s Take On Me as a ringtone, text message my friend in the club who is standing right next to me, and take voyeuristic photos of hot chicks at the mall?

Without Cargo Magazine, I don’t know how I can spend entire paychecks or get further into credit card debit?

I shall miss you Cargo Magazine.

Sitting on the porcelain throne will never be the same.

(Editor’s Note: Did you know you could buy REALLY cheap magazine subscriptions on eBay? Search eBay for whatever magazine title you want and voila. Subscriptions take 8 to 10 weeks to begin, but that’s the same amount of time it takes if you were to use a subscription card. Unfortunately, no Cargo Magazine. Playboy on the other hand…)

Item: Cargo Magazine
Purchased Price: $4.99 (2-year subscription)
Purchased At: eBay
Rating: 2 out of 5
Pros: The Playboy for quasi-product review blog editors. Tells me what’s cool and hip. Something to read on the throne. Cheap magazine subscriptions on eBay.
Cons: No longer in existence. Full of things I can’t afford. Excessive amount of ads of beautiful people. Number twos won’t be the same. Particular physical deficiencies. The loss of Gangsta Wannabe Monthly.