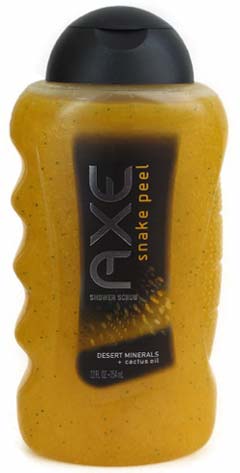 The six F’s I earned in college…Check.

Getting aroused by a Photoshopped nude image of Rosie O’Donnell…Check.

That experiment involving peanut butter, a microwave, and a body part that rhymes with the word “machinist”…Check.

I’m just making a list of things I want to scrub away with the new Axe Snake Peel Shower Scrub. According to its advertisements I’ve seen in magazines and on television, it can scrub away the shame caused by questionable hook-ups.

I figured if it’s powerful enough to scrub away the shame of hooking up with either a female Romanian bodybuilder with more armpit hair than most men, that “woman” met via the “Anything Goes” personals section of a local alternative newspaper, or the “25-year-old” party girl on MySpace who turned out to be a 54-year-old party woman, but partied so hard that she looked 74 years old, it could also help me get rid of all the shameful things I’ve done in my life.

The Axe Snake Peel Shower Scrub uses desert minerals and cactus oil to deeply clean and exfoliates to remove dirt, dry skin, and possibly that incident with a mime, monkey, and a bath tub full of mayonnaise.

After using the Axe Snake Peel Shower Scrub for several days, I can’t seem to scrub away the shame of owning the LaToya Jackson Playboy issue or that time I let a dog lick my face for longer than I should’ve and imagined it was Natalie Portman with really overactive saliva glands.

The Axe Snake Peel Shower Scrub has not been able to scrub away the shame I accumulated over the years, but I do think its masculine scent will keep away any possible questionable hook-ups, because it just doesn’t smell good. In the bottle, it smells good. All over my body, not so much.

How do I know this?

Well after taking a shower with the Axe Snake Peel Shower Scrub, I walked over to the convenience store down the street. While there, I passed by a very cute college girl in the candy aisle. Right after I passed by her, she began coughing, like she smelled something bad.

I think I was that something bad.

Item: Axe Snake Peel Shower Scrub
Price: $4.39
Purchased at: Kmart
Rating: 4 out of 10
Pros: It’s yellow. Desert minerals exfoliate the skin. Nice grippy bottle. Rich lather.
Cons: Like most Axe products, it smells lame. The desert minerals are redundant if you use a loofah. Women possibly won’t like the scent. Probably better repels women than attracts them. My list of things I need to scrub away.