The Delta Airlines Snack Pack I recently received on my five-hour red-eye flight to San Francisco was much like the flight itself…nothing really exciting.

My flight consisted of thin, blue blankets, a lot of empty seats, cute 30-something female flight attendants, and Big Momma’s House 2 as the in-flight movie.

My snack pack consisted of a shortbread cookie, buttermilk and herb crackers, a box of raisins, and a small container of spreadable Havarti cheese.

The buttermilk and herb crackers were like the empty seats on my flight, because there were plenty of them and they all were a little small. Each cracker reminded me of a tiny piece of Italian garlic bread. I tried it plain, but it definitely tasted better with the Havarti cheese that also came in the Delta Airlines Snack Pack.

The raisins were like the cute 30-something female flight attendants because they both had wrinkles (although they were very slight around the eyes of the female flight attendants), they are sweet, they are probably both delicious, and I’d like to take some home with me. The box of SunMaid raisins was the “fun-sized” one and it was definitely the healthiest part of the snack pack. 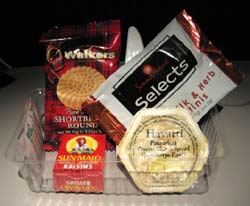 Heck, I wouldn’t even spend the two dollars to get the headphones so I could watch it on the flight.

Besides, why would I spend eight dollars for Havarti cheese when I can spend 55 cents for the cheese in a Kraft Handi-Snacks Cheese and Crackers, which the Havarti tasted like.

Overall, the Delta Airlines Snack Pack was a decent potpourri of individually-packed goodness. It was definitely better and more substantial than the hard-to-open honey-roasted peanuts that were given to me on previous five-hour red-eye flights.