I have to admit that I was wrong and I should never judge a book by its night vision sex tape.

I’ve made lots of fun of Paris Hilton, along with everyone else not named Paris Hilton, but I’m proud of her for trying to find her niche in the world. Sure no one really gave a rat’s ass about her until her infamous sex tape, but instead of letting that totally un-masturbationable video label her as the “Hotel Heiress Ho,” she’s gone out and tried to make something of herself.

The more that I think about it, the more I realize that Paris Hilton is just like me….Well, my college career at least.

I spent six years in college and during that time I switched my major about four times. First, it was Accounting, then Journalism, then Athletic Training, then American Studies, and then I finally ended up majoring in English. This is very similar to Paris Hilton’s life. First, she was a spoiled rich brat, then a “fashion model,” then an “actress,” then an “author,” and now she’s a “singer.”

Oh, but the similarities between Paris Hilton and my college career don’t end there. Paris failed horribly in the movie House of Wax and I failed horribly in Accounting 201, Math 100, Anatomy 301, Anatomy Lab 301, and Russian 101. Sure she won the 2005 Worst Supporting Actress Razzie for her role in the movie, but I won probation for my 1.5 GPA during my sophomore year.

Paris and I have also both been in relationships with people we totally regret being with. For her, it’s Rick Salomon, who stars in the sex tape with her. For me, it’s a girl I’m going to nickname “The Bass Mouth Kisser” because kissing her was much like French kissing a bass fish, except messier.

Since Paris and I seem to be kindred spirits, I had to pick up the first single from her debut album off of the iTunes Music Store. I also did it because I want to support her and her dream to be something other than that motionless short-haired blond chick in that sex tape. 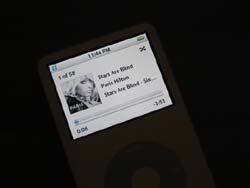 Don’t believe I bought it? Check my iPod’s screen on the left.

So can Paris sing?

Well with today’s technology, Britney Spears, Lindsay Lohan, and even tone deaf people like myself can sound good. This same technology made Paris sort of sound like Gwen Stefani in this song. As for the lyrics, I’m pretty sure she didn’t write them herself, because if you’ve read any of her books or the essay portion of her GED exam, you’ll know that writing isn’t her strong point.

(Editor’s Note: Congratulations to Helldog, Carrie, and CarbonNYC for being selected as the winners of The Impulsive Buy’s 300th Review Prize Drawing. They will each receive a $25 gift certificate to Threadless.com. Thank you to everyone who participated.)

Item: Paris Hilton – Stars Are Blind
Price: 99 cents
Purchased at: iTunes Music Store
Rating: 4 out of 10
Pros: It has the structure of a song: verse one, chorus, verse two, chorus, verse three, chorus. Kind of makes me want to skank. Lyrics and reggae beat would make for an awesome UB40 song. Paris’ attempts to make her niche in the world.
Cons: Money can buy you a record deal, or more specifically, a record label so that you can give yourself a record deal. Technology can make Paris sound like Gwen Stefani. Excessive use of a breathy voice, Paris Hilton’s un-masturbationable sex tape. My college career. “The Bass Mouth Kisser.”