The Shopping Cart takes a quick look at things that I’ve bought, but am too lazy to write a full review for.

What I’m Addicted To That Comes From Thailand, But Isn’t Heroin or Male Prostitutes 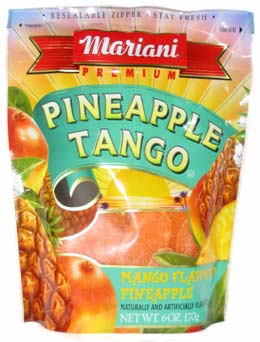 When I think of Thailand, and there isn’t a day that goes by that I don’t, I wonder many things, mostly its popularity as a sex tourism destination and if it’s a great place to get Thai spicy eggplant in garlic sauce.

With no fat, no cholesterol, and two grams of dietary fiber, it makes for a somewhat healthy snack. But the 25 grams of sugar per serving is a good reason to eat the Mariani Pineapple Tango with moderation. However, if you’re on a sex tour in Thailand, please do not use condoms in moderation, because where you go, is probably where dozens, possibly hundreds, have already been.

At $3.49, it’s a little pricey for a six-ounce bag of dried fruits here in the United States, but in Thailand that same $3.49 will get you a $3.49 hooker, unless it’s a male hooker, then it costs wayyyy more.

How do I know this?

What I’m Eating That I Wish I Weren’t Eating 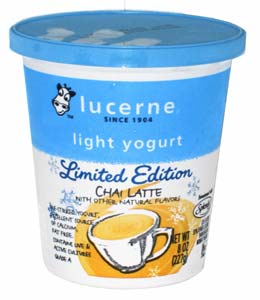 There are times that I regret being a quasi-product review blog editor.

One of those times happened after trying the Limited Edition Lucerne Chai Latte Light Yogurt, which I purchased from Safeway for 60 cents. After being disgusted by its horribly gross tangy spicy taste, I thought about walking away from the quasi-product review blog game, because I didn’t know whether my taste buds or my stomach could handle the punishment of another shitty product.

But after recovering from said shitty product, I thought if I’m not around to protect the innocent from horrible products, then who will?

At first I thought the Limited Edition Lucerne Chai Latte Light Yogurt would be decent because its smell kind of reminded me of egg nog. However, a spoonful later, I really felt like gagging and going to the bathroom to pray to the porcelain gods.

As you can see on the packaging, it says “Chai Latte with other natural flavors.” I tried to figure out what those “natural flavors” were by dipping my spoon into the yogurt again and again, trying to consume as little yogurt as possible. Believe it or not, the taste was actually familiar to me and I began going through all the “natural” things I’ve put in my mouth over the years, including tree bark, pine cones, grass, dirt, leaves, twigs, and berries.

As I continued to ponder what was so familiar about the taste of the Limited Edition Lucerne Chai Latte Light Yogurt, I noticed the car air freshener that my friend Lana gave to me, which says, “Donating Blood Makes ‘Scents'” After the hamster in my head started running in its wheel, I quickly realized that the horrible spicy Chai Latte yogurt tasted almost exactly like how that car air freshener smells.

Sure it’s fat-free, has low-cholesterol, low-sugar, is a decent source of calcium, and contains live and active cultures, but it’s also got Splenda and it tastes like a car air freshener. I bought two of them, but both will be either thrown away or given to my worst enemy in a brown paper bag and set on fire on their doorstep.