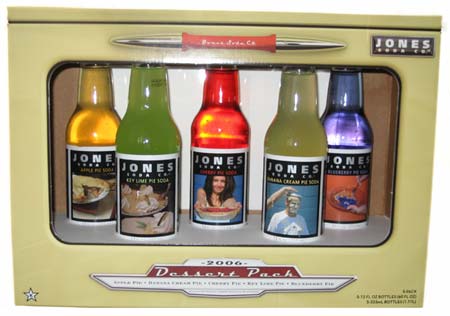 (Editor’s Note: If you’re a fan of clowns, have many wonderful childhood memories with clowns, your mother or father was a clown, or you’re a clown, I’d suggest you skip this review. Why? Oh, there’s, um, no particular reason, but just skip it.)

Whether it be the creepy Ronald McDonald, eerie Bozo the Clown, disturbing Homey the Clown, frightening Pennywise, or the threatening Krusty the Clown, I believe all of them can be taken out with any of the flavors in the Jones Soda 2006 Dessert Pack.

Why do I want to get rid of clowns? That’s my business, not yours, but let me just say this, if it were up to me, Grimace would be the top spokesperson for McDonald’s. Besides, clowns don’t make me laugh, they make me cry, like shopping mall Santas and the words “I don’t think we should see each other anymore.”

The excessive makeup they wear doesn’t make clowns look fun, it makes them look evil and up to no good, like Tammy Faye Bakker and Rupaul. Just thinking about the makeup on those two give me the shivers. I think the only reason why someone would wear that much makeup is because they’re hiding something. In Tammy Faye’s instance, it was her ex-husband’s illegal activities. InRupaul’s case, it’s a penis.

Also, what’s up with those big shoes? Just like the Big Bad Wolf’s big mouth is better to eat Little Red Riding Hood with, a clown’s big shoes make it easier for them to stomp on my toes or kick me in the balls.

The first flavor I tried was the Cherry Pie Soda. It had a sweet and slightly tart cherry flavor and I could also taste Jones Soda’s attempt to include the crust flavor along with it, all of which formed a pretty decent flavor. The red color of the Cherry Pie Soda also blends in well with the clown’s red ball nose — and the blood dripping from it after breaking the clown’s real nose.

The next flavor I tried was the Banana Cream Pie Soda, which I thought would turn out to be the best, but instead was my least favorite. It smelled banana-ish and it initially tasted banana-ish, but after that it tasted kind of buttery, which turned me off to it. However, if you like Jelly Belly buttered popcorn jellybeans, you’d probably like the buttery taste. The Banana Cream Soda itself may not be good taste-wise, but I imagine it would be good at smearing a clown’s makeup.

After taking the first swig from the Apple Pie Soda, I thought its flavor was very familiar and I tried to figure out what it tasted like. While I thought about that, I also tried to figure out how many clown orifices the neck of the Jones Soda bottle would fit into. The answer was five, but possibly seven, and I also realized that the Apple Pie Soda tasted very similar to the cinnamon-flavored Big Red gum.

I saved the final flavor, Key Lime Pie, for last because I’m not a big fan of this type of pie, but its slightly sour, citrus flavor was surprisingly good, and kind of reminded me of lime Jello. I believe the bottle for the Key Lime Pie Soda is also surprisingly good — as a deadly weapon when cracked against clowns.

Jones Soda also comes out with a yearly Holiday Pack which consists of horrible soda flavors like Turkey and Gravy and Corn on the Cob. Sure I could probably do the same damage to clowns with the Jones Soda Holiday Pack and its horrible taste would add insult to injury, but with the Jones Soda 2006 Dessert Pack it would just bring sweet, sweet injury to clowns and that’s good enough for me to make up for all the crying they made me do.