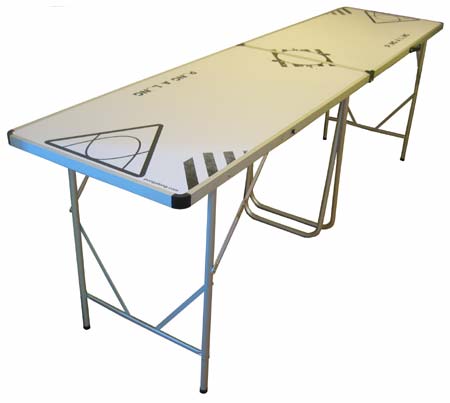 I didn’t participate in any drinking games in college because I spent most of my time using myself as a guinea pig for serious sociology research on intense subjects, like finding out what effects playing Sony Playstation six hours a day has on a college student’s grades, seeing if a student can get a passing mark by not going to class throughout the semester and only taking the midterms and final, experiencing what its like to be on academic probation, and perhaps my favorite research topic, losing one’s virginity, which I’m still doing the research on because I have yet to pass first base due to my inability to take off a woman’s bra.

I hear there are many drinking games out there and I imagine they all have the same goal — to get everyone fucked up. Late last year, the Impulsive Buy was sent a portable beer pong table from a company called Pong A Long. At the time, I had no idea what beer pong was, but thanks to Wikipedia and one of my co-workers, who played it a lot at Penn State, I soon had a better understanding of the game.

The setup for beer pong is simple. Get a long table or take a door off of its hinges and place on top of two work horses, then set up ten tall 16-ounce red plastic cups on each end of the table like they were bowling pins, then fill each cup with the cheapest beer you can get your hands on, and then get some ping pong balls, preferrably ones that weren’t from a stripper who shot them out of her vagina.

Since beer pong isn’t a game I can play by myself, like Monopoly, Jenga, and Solitaire, I needed an opponent. So I decided to play against fellow English degree holder and new Impulsive Buy writer, Stef.

Unfortunately, the both of us are not beer drinkers, but since we both enjoy vodka, we decided to go with Stoli Blueberi vodka and seltzer on the rocks. Now we could’ve shown you pictures of our beer pong game, but we didn’t think it would give you an accurate play-by-play. So using our English degrees, we decided to use the medium of words and express our competitiveness in the form of a rap battle. Enjoy.

Marvo:
The game is beer pong. The winner will definitely be me.
The poison don’t matter, beer or what were using, Stoli Blueberi.
I may have a lower alcohol tolerance, but that’s all right.
This game will be done quick, like a 1980s Mike Tyson fight.
Pong A Long table is out and the twenty red plastic cups are set.
So are you ready to have your ass handed to you, Stef?

Stef:
Whatever, buddy.Â  That’s all I’ve got to say,
You really think you can take this all the way?
Like Bon Jovi says, you’re “Livin’ on a Prayer,”
You’d be better off playing with some Care Bears.
Get ready to get drunk, loser, you’re through;
My balls are gonna be straighter than Tom Cruise.

Marvo:
Oh, “straighter than Tom Cruise?” I guess I have more hope.
Because his sexual orientation has been the butt of so many jokes.
It’s been five rounds and you haven’t got the ball in a cup.
Like Michelle Wie playing in a men’s event, you won’t make the cut.
With my pinpoint accuracy and rifle arm, there’s no way I can lose.
Need help? I’ve got a rocket scientist to calculate a trajectory you can use.

Stef:
Watching you cross your eyes while you aim is the sexiest thing.
Is your constipated throw and frustrated sigh all you’re gonna bring?
You can’t even hit the table, your accuracy’s a lie.
You throw like a girl, you’ve got nothing between your thighs.
Hurry up and throw it, there’s no need to think.
Hurry up and put it in, I need one of those drinks.

Marvo:
I’m keeping you sober, so I can give you a head start and me a handicap.
You may have made me drink six cups, but get ready for the comeback.
It’s going to be so much sweeter when I come from behind for the win.
It’s going to “Take My Breath Away” like that Top Gun song from Berlin.
I’m a lightweight, but the alcohol isn’t preventing me from making a shot.
Just like one-hit wonder, Buster Poindexter watch me get “Hot Hot Hot.”

Stef:
I’m not calling it a comeback like LL Cool J,
You can’t even hit the table, do you need to stop and pray?
I’m thirsty, want me to throw for you?
You’re certainly not getting anywhere anytime soon.
How’s about this?Â  I’ll let you keep going until you get one in,
I’m feeling sorry for you, since there’s no way you can win.
Like Pat says, you better “Hit Me With Your Best Shot,”
You’re drunk, you can’t aim, you’re everything I’m not.

Marvo:
The Pong-A-Long table is too long, it’s messing with my depth perception.
Can’t get a ball in, even if I’m aiming straight like a Bob Dole Viagra erection.
Never mind, got a ball in a cup, better drink up, it’ll help you drown the loss.
I’m feeling lucky, like any guy who went out with Mona from Who’s The Boss.
I’m on a roll, I’m knocking down cups fast and now we’re both down to two.
In no time, I’ll make you look like a fool, like a crazy, drunken Paula Abdul.
Hey do you want to listen to a bit of my beer pong champion speech?
“Thanks to those who supported me and the loser for wanting to compete.”

Stef:
I’d like to thankÂ YOU for finally making one.
Geez, I needed a drink like Homey needs fun.
Don’t blame the table for your shortcomings, friend.
It’s your sad little incompetenceÂ that’s becoming a trend.
Let’s not forget that I had to give you free throws,
Otherwise we’d both be here until Vern Troyer grows.
So stop with the excuses and throw the damn ball,
I’m ready with my talent, are you ready to fall?

Stef:
Hell to the yeah, Marvo, you’re totally through.
It’s over like the Super Bowl; feel like the Bears, do you?
Admit you’reÂ a scrub, wear your loser’s crown.
Go retreat toÂ the corner and sit yourÂ tragic ass down.
Drink up that final cup, it’s the end of your story,
Like Jon Bon Jovi, you’ve been shot down in a blaze of glory.

Overall, the Pong A Long 7′ Beer Pong Table is pretty convenient for those who play often, although it is a little pricey for those college students who mostly eat ramen. It folds in half, has a handle and is somewhat lightweight (a little more than 20 pounds), making it portable, but even with it folded in half, it’s still too big to fit into the trunk of my Toyota Corolla, which can comfortably hold three to four dead or alive bodies.

Besides being somewhat portable, it’s well constructed and it only takes seconds to set up…unless you’re already drunk, then it obviously takes longer. How much longer? If you’re a dude, here’s a little equation to help you figure it out:

Your answer will end up being in minutes. So lets say you’re 160 pounds minus the 60 ounces of Bud you just drank multiplied by the three minutes it took you to figure out the hot blond chick across the room has a goatee, then divide that by 60 seconds and it will take you five minutes to set up the Pong A Long table — if you didn’t pass out.

Oh yeah, if you’re drunk, you might want to lay on top of the Pong A Long table because its cool surface will feel good on your skin, much like the tile bathroom floor you’re probably used to.

Item: Pong A Long 7′ Beer Pong Table
Price: FREE (Retails for $64.99)
Purchased at: Given free by Pong A Long
Rating: 8 out of 10
Pros: Portable. Easy to set up, unless you’re drunk. Well constructed. Better than taking a door off of its hinges and then putting it back. Its cool top will feel good on skin when drunk. Can double as a dining table. Beer pong is good fun. Vodka.
Cons: Getting my ass handed to me and feeling a little emasculated. Kinda pricey for most college students. The length of it seems a little too long. Getting a ping pong ball into a red cup is hard. Folding it in half doesn’t make it small enough to fit into the trunk of some cars. I throw like a girl. Not knowing how to remove a woman’s bra.