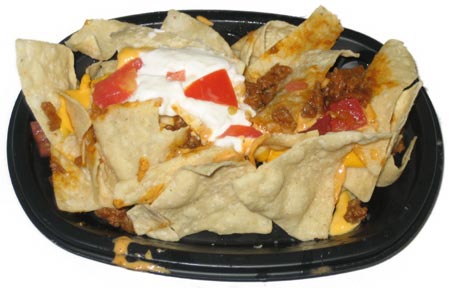 Just like boob jobs, nachos come in different forms. I think someone’s momma once said, “Life is like a plate of nachos, you never know what you gonna get.”

Sometimes you get a whole bunch of chips and not a lot of other toppings, but that’s not nachos, that’s just chips somebody accidently spilled some stuff on.

(Editor’s Note: That last paragraph sounded like a Mitch Hedberg joke and I can imagine him saying it in my head, but I don’t think it’s one. I hope.)

Nachos may not be the prettiest food when you’re sober or not really hungry, but you have to admit they look much better than Tara Reid or Courtney Love in a bikini. Actually, nachos do a great job with satisfying one’s appetite, while seeing Reid or Love in a bikini makes one lose their appetite.

Just to let you know, I’m not high right now, but I do think that the new Taco Bell Zesty Nachos are a metaphor for life. It comes with tortilla chips, seasoned beef, zesty nacho cheese sauce, tomatoes and sour cream. Each of those ingredient represents a part of every individual.

The seasoned beef is like the muscles on your body, because the beef is technically muscle from a cow. The zesty nacho cheese sauce is like your soul, because when you pass on your soul will still be around and when you pass gas the nacho cheese sauce smell will still be around. The tomatoes represent your heart, because just like your heart, tomatoes are red as well. Finally, the sour cream is your experiences. Your bad experiences are the sour part, while your good experiences are the creamy part.

All that stuff put together makes you and who you are, and unless you’re an asshole, it’s a good thing.

Okay, those last few paragraphs sounded like I was high, but I was not. I think I’m just hungry, because one of these Taco Bell Zesty Nachos wasn’t enough to fill me up. I’ll admit that it was good and for a buck and a half I shouldn’t expect much, although for the rest of the United States, it costs only 99 cents.

Despite having the meal-like nutritional values of 470 calories, 32 grams of fat, 1.5 grams of trans fat, 40 mg cholesterol, 730 mg of sodium, 34 grams of carbohydrates, 4 grams of dietary fiber and 10 grams of protein, I think the Taco Bell Zesty Nachos make a much better snack than a meal.

(Editor’s Note: Thanks to Impulsive Buy reader Daniel for letting me know about the Taco Bell Zesty Nachos. Thanks to him, I think my trans fat intake is about to go up.)

Item: Taco Bell Zesty Nachos
Price: $1.49 (99 cents for the rest of the country)
Purchased at: Taco Bell
Rating: 4 out of 5
Pros: Tasty. Kind of cheap for me, but really cheap for the rest of the United States. Makes a great snack. Nachos are a metaphor for life. The human mind.
Cons: Small serving size and not filling, but kind of worth it for the price I paid. Messy. 1.5 grams of trans fat. Tara Reid or Courtney Love in a bikini. Nachos without a bunch of toppings. Being an asshole. Taco Bell prices on this rock in the middle of the Pacific Ocean.