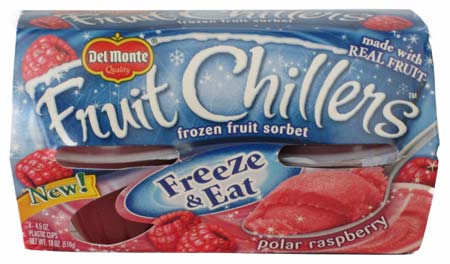 I might’ve given the Del Monte Polar Raspberry Fruit Chillers a five rating if it weren’t for the frickin’ raspberries.

I don’t like raspberries, because I don’t like fruits that have silent letters in their names and makes fun of my lisp at the same time. But don’t call me a fruit-ist, because I enjoy almost all other fruits. Although I also really hate those damn Ugli fruits, because I’m not going to be what I eat.

Raspberries are also big fat liars, because according to Wikipedia, they aren’t even berries. How can I trust a fruit to give me delicious goodness when it’s totally not being honest to me? Why can’t the raspberry be more truthful like an orange? 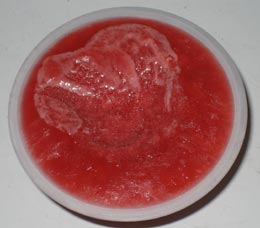 Despite my disdain for raspberries, I actually did like the Del Monte Raspberry Fruit Chillers, which calls itself a frozen fruit sorbet. However, just like raspberries, every Del Monte Raspberry Fruit Chillers is a liar because it calls itself “frozen,” but if you buy one at the store it won’t be frozen or even near the frozen food aisle. It’s found with the canned fruits, which kind of makes sense since it’s made from 3/4 servings of real fruit. In order to get them frozen, they have to be stuck in a freezer overnight or spend a few days in the bosom of a cold-hearted bitch.

Each package comes with four 4.5-ounce cups and each one of those has 100% of your daily Vitamin C and zero fat. Its sweet and slightly tart taste is very good and it makes a nice snack to have on a hot summer day or a masochistic snack on a cold, snowy, and blustery evening outside with nothing but a g-string and a pair of Birkenstock sandals on.

(Editor’s Note: Thanks to Matt at Colburn Communication for sending me a free pack of Fruit Chillers, although I really wanted the strawberry or mango one. Also, Lord Jezo at 78west liked them as well, but he tried the strawberry one. Lucky bastard.)

Item: Del Monte Polar Raspberry Fruit Chillers
Price: FREE
Purchased at: Received from Matt at Colburn Communication
Rating: 4 out of 5
Pros: Despite it being made out of those damn lying raspberries, it was good. Fat free. 100% of daily Vitamin C. Made with 3/4 servings of real fruit. Four individual cups. Contains no artificial flavors. Does not contain high fructose corn syrup. Gluten-free (That’s for you, Mir). Saying cantaloupe five times really fast.
Cons: Raspberries are frickin’ liars and make fun of my lisp. Silent letters. Have to freeze overnight before eating. Being outside in nothing but a g-string and a pair of Birkenstock sandals. Ugli fruits.