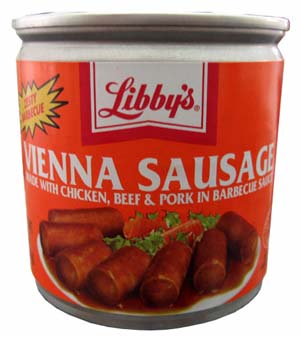 I’ve always been told that one of the most important things one can do in life is make a good first impression. Unfortunately, I tend to ignore people I deem stupid so most advice goes way over my head. I once took a girl out on a first date and audibly complained that getting another slice of cheese on my burger costs an extra 30 cents. Later on, I mused about “really thinking about buying war bonds” and “striking it rich with Pog collecting.” After I finished explaining that “I’m not a stalker,” she seemed visibly disgusted.

Alas, it was not meant to be.

But something I’ve learned from television is that no matter how badly you screw up, you can always dye your hair and move to a different state. This is why back in the 90’s I looked like an Asian Dennis Rodman. Not exactly a pretty sight, but that’s the sacrifice I had to make. All of that’s in the past and now I’m here with all you fine folks reviewing everything America has to offer: the good, the bad, and the Libby’s Zesty Barbecue Vienna Sausages.

Vienna sausages never made a good first impression with me. They were limp, soft, and devoid of any flavor except for perhaps urine and pig intestines. Looking like flaccid hot dogs didn’t help their case either. The fact that they even call it a Vienna sausage is obscene. It’s like inventing a “Luxembourg Sandwich” and making it with bologna and chicken gravy. Granted, that sounds absolutely delicious, but it doesn’t make it accurate.

Vienna is supposed to be a city rich with culture, history, and from what I gathered from the movie Hostel, hot and easy Euro chicks. These sausages have none of that.

Actually, I might be shortchanging them a bit — they might contain Euro chicks, since they’re already made with chicken, beef, and pork. Throw in some tuna and they could make a formidable basketball team down at the local YMCA.

Vienna sausages are life’s “fuck you” waiting in the cabinet when you’re hung over and depressed; heart welling with anguish after a long night of binge drinking because you’re wondering why Gordon Ramsey has to be so darn mean on Hell’s Kitchen. All you have left after that are these crimes against nature, which are mysteriously cheaper than cat food and come in disturbingly similar packaging. I’m not one to turn down a good can of Fancy Feast, but it’s not exactly something I’m proud of. There is a saving light, however! The sausages now come with a zesty barbecue sauce. 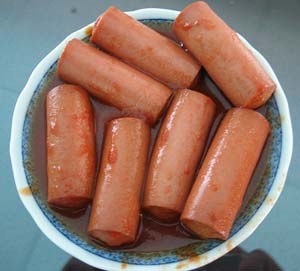 The makers of the sausage would like to believe that the addition of an awful sauce would make their product suitable for human consumption. My rebuttal would be a Lex Luthor-style WROOOONG!!!

Damn, where do I start?

The sausages have a distinct metallic aftertaste. I’m not sure if this is because they’ve been in a can since the first world war, but it is not exactly pleasing to the palette. The barbecue sauce is just regular Vienna sausage sauce mixed with some ketchup and brown sugar. It makes for a viscous disaster of a condiment. I tried them on a hot dog bun and barely got through two bites. I wouldn’t even feed it to my worst enemy, for I fear that upon consumption he would be stricken with so much rage that I would be immediately eviscerated.

Maybe it was stupidity or maybe it was morbid curiosity, but I was drawn to these things. For that, I am ashamed. I hope Libby’s enjoy their 48 cents, because it is safe to say that I will not be making this purchase again unless I am attempting suicide and need some extra incentive.