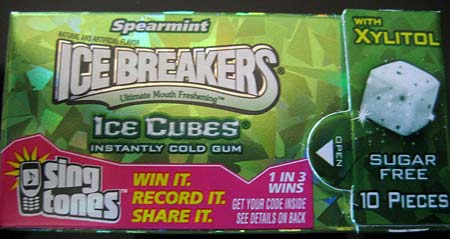 I made an exception with the IceBreakers Ice Cubes because of its novelty factor. This isn’t IceBreakers’s first foray into the world of gimmicky products, so they should know what they’re doing. Anyone remember Liquid Ice and how stupid those commercials with the Duff sisters made you feel? Now that they’re out of the equation, no longer will you question whether it’s liquid, it’s ice, or if anyone gives a damn about your inane queries. It’s all been settled, and ice has apparently won the battle.

IceBreakers Ice Cubes also appealed to me because breaking the ice in a social situation has never really been my cup of tea. This is a big problem in all of the facets of my life. Take philosophy class for example: “According to the rules of Fight Club, isn’t this sentence paradoxical?”

Or pickup basketball games: “Dude, can’t you toss it in? Your balls keep dangling around the rim!”

And especially first dates: “I’ll be honest, one of my guilty pleasures is getting naked in front of a mirror and loudly singing the Pokemon theme song as I gyrate and let ’em bounce around.”

So I was hoping that these particular IceBreakers would break the streak of bad ones. As I opened the small box, I was immediately hit with the headache-inducing fragrance of fake mint and xylitol. It was not a promising start.

Xylitol is apparently an alternative to sugar that’s supposed to have a natural cooling effect on your tongue. It can also cause nausea and act as a laxative in high enough doses, but the same could be said about almost anything I eat. I’m not going to hold that against it. However, I can’t excuse the fact that it’s a pretty horrible sugar substitute.

Like all of my other icebreakers, these particular cubes failed rather miserably in providing any type of freshness. Not only are they sickeningly sweet, but they have a grainy and unpleasant texture to start. Any cooling effect you’re supposed to get is completely masked. Worst of all, I didn’t even win the damn Singtone contest that I had banked my future on. How will I survive college if people can’t hear my rendition of Pat Benatar’s “Love is a Battlefield” every time my phone rings?

Overall, the only thing these cubes have going for them is their convenient shape. Now I can see why there are not seen suggestively licked on billboards. If you are the type of person who enjoys munching on sugar cubes and would like to replicate the experience in gum form, then this is the treat for you. For everyone else, the money spent purchasing these supposed “ice cubes” would be better served going towards some real ice cubes and crushed mint.

Admittedly, that would only lead you to heavy drinking after you figure out that you’re halfway towards a mojito, but I can hardly be blamed for your alcoholism.

Item: Icebreakers Ice Cubes
Price: 79 cents
Purchased at: Circle K
Rating: 2 out of 5
Pros: Extremely convenient shape and packaging. Decent enough after initial grainy stage of chew. Possibility of winning a Singtone. The original Pokemon theme song.
Cons: My icebreakers. Way too sweet and grainy. High possibility of not winning a Singtone and the ensuing disappointment. Letting creation of your own mint ice cubes lead you down path of alcoholism.