How I came about stumbling upon this box of evil seemed innocent enough. I was minding my own business, shopping at the gigantic corporate mega mart that simultaneously fuels and ruins our country, when I had a sudden craving for tuna. I skimmed the aisles until I found the cheapest can I could and then noticed something beside it. Like a siren, it called to me. I picked it up and threw it in my cart. Little did I know I was in possession of a product that was more akin to Pandora’s Box than a can of tuna.

However, it is addressed as a salmon cup, which is neither chicken nor tuna. To make matters more complicated, the words “Mandarin Orange” are included in a big box as if to indicate that this was indeed a fruit cup and that everything else was included for the sole purpose of pissing me off.

After my head exploded and the minimum wage worker lazily wiped the remains off the floor, I checked out. I mentioned to the cashier, “You do realize that this is fucking ridiculous, right?” but only received a puzzled look in response. I took the cup home and decided to give it a shot.

This is by far the most vile thing I’ve ever attempted to consume. The scent is somewhere between orange scratch-n-sniff and demon breath. I am convinced that if Syracuse University’s orange mascot died in a football celebration gone terribly awry, this is what he’d smell like after two weeks. If I didn’t know any better, I’d think this thing came straight out of an H.P. Lovecraft novel.

By this point I had confirmed that it was indeed salmon in some type of mandarin orange sauce. My first taste was one of bewilderment and disgust. “I don’t recall salmon tasting like syrup, orange liquor, and charcoal,” I thought to myself. 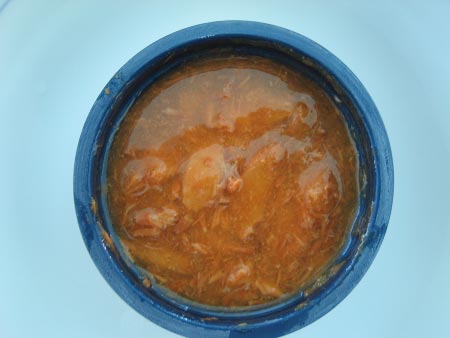 Needless to say, I quickly spit it out and burned the plastic bag just in case it decided to return and make me eat it in my sleep. I ran into the garage seeking sandpaper to lick so I could get rid of the taste.

They say that which does not kill you makes you stronger, but those people apparently never tasted mandarin orange salmon cups. The sadist in me wants you to try it with your family and share in the pain that I’ve felt, but the Jesus complex in me wants to save you from this horrible wreck.

It’s your call, but don’t come back crying when your spouse leaves you and your oldest daughter becomes a broken emo girl that I may or may not try to sleep with at a party.

38 thoughts to “Chicken of the Sea Mandarin Orange Salmon Cups”