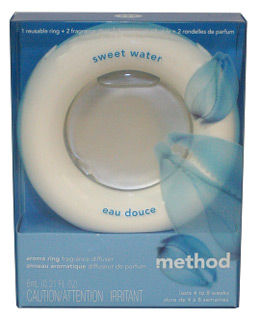 Meditation is something I try to do whenever I want to clear my mind, body, and soul. I’ll just sit on the floor with my legs crossed, close my eyes, inhale deeply, hold each breath for a moment, and then slowly exhale. Chanting sutras are optional…and so are clothing.

To get to my quiet place, I need to have optimal conditions, which is somewhat similar to the conditions needed for me to get down and shake my thang on the dance floor — a large open space, not much light, and a nice aroma in the air.

A relaxing scent is essential when meditating because it’s hard to align my chakra when I’m smelling my own sweaty, deodorant-less, naked body. So over the past few weeks I’ve been trying the Method Sweet Water Aroma Ring while I meditate. It consists of a plastic ring that has slots for what Method calls a “fragrance disc,” which has a liquid fragrance that diffuses through a membrane. Think of it as aroma osmosis trying to cover up the stank that is my putrid body odor.

The Method Sweet Water Aroma Ring doesn’t need electricity or batteries to operate and it contains two fragrance discs, each of which lasts up to four weeks. If you live with a roommate who doesn’t understand the concept that higher humidity minus deodorant plus more sweat equals horrible stank, you can use two of the fragrance discs at the same time in the Aroma Ring and attach it around your neck, but for most situations, only one is needed. Additional fragrance discs can be purchased in packs of two for around five dollars.

The Sweet Water’s sweet floral scent was kind of awkward at first, but just like the aroma of my own poop, I got used to it. I also thought the Aroma Ring would make a wonderful car air freshener, but apparently its membrane hates the triple-digit temperatures that my car’s interior reaches while it’s parked in the sun. After several days in my car, the edges of the fragrance disc cracked, making it sort of look like the Eye of Sauron or the eye of one really stoned mofo.

While using the Aroma Ring during my hardcore meditation sessions I could smell its sweet scent as I sat in the middle of my darkened open space, but it wasn’t strong enough to overcome the other smells circling the room, like the frozen pizza I was baking in my oven and my sweaty, deodorant-less, naked body.

Overall, I found that the Method Sweet Water Aroma Ring can’t provide me with a nice consistent aroma in my meditation room due the room’s size. However, the Sweet Water scent was pleasant after I got used to it and the fragrance discs lasted for a good amount of time. Personally, I think I need something with a stronger scent, because my sweaty, deodorant-less, naked body is pretty stank.