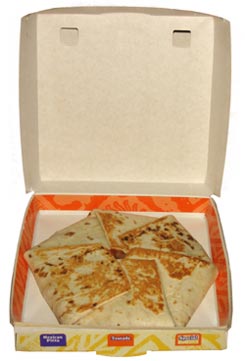 Oh man, I so badly wanted to chuck the Taco Bell Crunchwrap Supreme.

Not because it didn’t taste good, but because it looked like a discus and I wanted to set the Guinness World Record for longest Taco Bell Crunchwrap Supreme throw.

I also wanted to start a food fight in the middle of Taco Bell with some guy who was looking at me weird as I was practicing my discus throwing form.

Anyway, the Crunchwrap Supreme was around seven inches in diameter and three-fourths of an inch thick, which is roughly the size of a regulation Olympic women’s discus. Inside its soft flour tortilla was seasoned beef, nacho cheese sauce, sour cream, lettuce, tomatoes, and a crunchy tostada shell.

Not only are the nacho cheese sauce and sour cream the perfect ammo for messing people’s clothes in a food fight, they also make the Crunchwrap Supreme very tasty and, quite possibly, help me come closer to my goal of having my blood replaced with dairy products.

Perhaps the best thing about the Crunchwrap Supreme is the fact that, despite its size, you can eat it with only one hand and you don’t have to worry about it falling apart like other tacos, unless your hands are small like carny or you’re the notoriously clumsy pirate, Captain Stubsforlimbs.

Of course, being able to eat it with one hand has many advantages.

In other words, it’s the perfect food to multitask with.

Item: Taco Bell Crunchwrap Supreme
Purchase Price: $2.49
Rating: 8 out of 10
Pros: Tasty. Nice size. Can eat with one hand. The perfect multitasking food. Makes the perfect food to fling in a food fight.
Cons: Hard to add taco sauce, but it really didn’t need it.