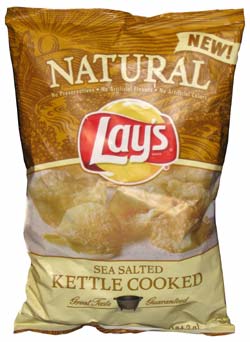 After opening a bag of Natural Lay’s Sea Salted Kettle Cooked Potato Chips and smelling them, I felt eating them on my living room’s couch, while watching ESPN SportsCenter, in my stretched-out, four-year old Late Show with David Letterman t-shirt and surf shorts was not the right atmosphere to consume this bag of chips.

So I closed the bag, sealed it with a Chip Clip, and headed out the door.

About 20 minutes later, I found myself sitting in the middle of a crowded beach, surrounded by imported sand, beautiful women in bikinis, children laughing, and many failed attempts at sand castles. I breathed deeply and let the salty air, mixed with various scents of sunscreens and tanning lotions, fill my lungs.

“Aaah, this is a much more appropriate place to enjoy these chips,” I said to myself, as a bronzed blond in a string bikini passed by. “Even the sand in my crack feels right.”

I removed the Chip Clip and reopened the bag of Natural Lay’s Sea Salted Kettle Cooked Potato Chips and began chowing them down.

These chips were very different from your normal Lay’s potato chips. First off, they were noticeably thicker and crunchier. They were so crunchy that they actually drowned out part of the argument some couple next to me were having about how his eyes were wandering around the beach looking at all the other women.

However, I REALLY wished the crunchiness could have somehow drowned out the accidental sight of seeing a hairy, overweight guy wearing a blue Speedo coming out of the water, with either pubic hairs or the legs of dead spiders sticking out from behind his Speedo.

Ugh! I think that image will forever be etched onto my brain, but at least I found out the hard way that the water was cold.

The chips were pretty good and were a nice golden brown, but they weren’t as good or as golden brown as the cute Asian girl who was tanning to the left of me in a skimpy yellow floral bikini.

I would’ve gone and talked to her, but my paleness would’ve made us look like a set of salt and pepper shakers, and her buff, golden brown boyfriend next to her would’ve kicked my ass.

Besides being thick, crunchy, and golden brown, another thing that made these chips good was the sea salt, which gave the chips a nice salty taste that you could actually see on each chip.

Finally, the last thing I liked about these chips was the fact that there were no preservatives, no added colors, and nothing artificial. I wish I could’ve said the same for a trio of college girls that were walking up and down the beach, because their six slightly bouncing boobs looked totally fake.