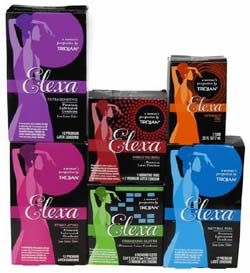 I have never wanted a clitoris before, but ever since I got these Trojan Elexa products, I wish I could grow one.

The new Trojan Elexa line was created from a woman’s perspective, thankfully not from the perspective of Angelina Jolie, because while the condoms would’ve prevent unwanted pregnancies, they might have caused excessive adoptions and many adopted kids with mohawks.

When I received the box of Elexa products, from Impulsive Buy reader Robert, I was surprised to see more than condoms. There was also a box of Intimacy Gel, Freshening Cloths, and a Vibrating Ring.

The first thing I decided to test was the condoms. I received three varieties: Natural Feel, Stimulating, and Ultra Sensitive. They all looked like normal condoms, but the Natural Feel condoms has a premium water-based lubricant that works with a woman’s natural lubrication, the Stimulating condoms are ribbed and contoured, and the Ultra Sensitive condoms are ultra thin.

Without a girlfriend or enough money to buy a girlfriend for the evening, I had no way to find out if they were stimulating, ultra sensitive, or felt natural.

Not even using them to deep throat a banana would’ve been helpful. However, I could test the claim on the boxes that they all have a low latex odor by conducting a condom smell test, which is very similar to the game, “Whose Armpit Are You Smelling Now?”

I grabbed one of the Elexa condom and a condom from my “Just in case I get some. Oh, who the hell am I kidding, I’m not getting any” stash. I ripped open the packaging for both condoms and took a whiff of each. The Elexa condom did have a significant lower latex odor than the other Trojan condom I smelled.

I really wish Trojan would make all their condoms with a low latex odor, because it’s not sexy having my hands smell like latex gloves when I pay…Um…I mean, when I want a woman to suck on my fingers…and maybe my elbows.

The next product I tested was the Intimacy Gel, which would’ve been more fun to test if I could grow a clitoris or had access to a clitoris. Instead I put some on one of my palms and began massaging it with my other hand’s fingers. I could feel the warmth of the gel and it felt nice, kind of like when I put on sunscreen from a bottle that’s been sitting in the sun.

Oh, if only I had a clitoris.

Also, I have to say, the instructions for the Intimacy Gel are the sexiest instructions EVER printed on a product: “Apply a small amount of Elexa Intimacy Gel, about the size of a dime, onto the tip of the finger and gently massage the clitoral area. The gentle warmth from applying the gel enhances the pleasure of an intimate physical touch. Repeat as desired. Oh yeah! That’s the spot. Repeat, baby! REPEAT!”

Next up were the Freshening Cloths, which look like handiwipes from KFC, but smell like potpourri. The purpose of these are to help a woman feel fresh and confident down below.

However, I could also see men using these, because I’m sure women don’t like it when their man’s “roll of quarters and loose change bag” are smelling kind of funky and they’re going down to receive a withdrawal.

I didn’t read the instructions so it took me awhile to turn on the Vibrating Ring, but now that I think about it, I also have trouble turning on women and televisions without remote controls.

How well does it vibrate? Well here’s a video of me putting it into action. (Quicktime required for video.)

According to the instructions, the Vibrating Ring’s battery should last for about twenty minutes or so, which means I can use it about twenty times before the battery dies.

Now the surprising thing about the Trojan Elexa line is that you won’t be able to find them at the usual “Wall of Condoms” at your favorite store. These products are only available in the feminine hygiene section.

Oh, except maybe the Vibrating Ring, which can’t be sold in eight states.

(Editor’s Note: Thanks to Robert, who has Trojan as a client at the PR firm he works at, for the Elexa products. I would also like to thank Robert for reminding me that I’m not getting laid, but the vibrating ring will have to suffice for now.)