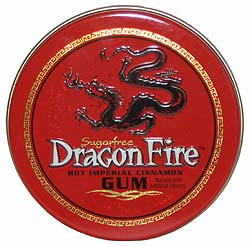 I don’t know about you, but when I was growing up I didn’t want to have Superman’s superhuman strength, Flash’s lightning quick speed, or Wonder Woman’s stupid lasso that made people tell the truth. I wanted the special ability of shooting fire out of my mouth.

I also came up with a cool name if I ever had the ability to shoot fire out of my mouth. I would’ve called myself, “Hellmouth.”

Although now that I’m older and wiser, I realize that this name would either put fear into the hearts of criminals or make everyone think I had bad breath.

When I received a can of Dragon Fire Gum from Impulsive Buy reader Akiko, who picked it up during her journey to the exotic land called Los Angeles, I thought it would allow me to have the fire-shooting breath to destroy a miniature version of Tokyo that I would’ve built using Legos and Jenga pieces. Instead it allowed me to have cinnamon smelling breath.

Inside the can of Dragon Fire Gum was a slip of paper with the words:

According to ancient oriental beliefs, dragons breathed fire to protect treasures from evil spirits. Dragon Fire’s intense hot cinnamon taste will protect you from evil breath spirits. Each piece of gum is loaded with hot imperial cinnamon and then singed to seal in the hot cinnamon flavor.

So bad breath is caused by evil spirits and not by garlic, onions, smoking, having food debris trapped in your mouth, or kissing a hooker with missing teeth?

If that’s the case, I don’t need gum or toothbrushes, I need either Holy Water or the Ghostbusters.

The dragon design on the outside of the can was cool. However, the gum on the inside, not so much.

Each Dragon Fire gum looked like a red peanut M&M with wrinkles. It also looked like it had a hard shell, but it didn’t have one.

Item: Dragon Fire Gum
Purchase Price: FREE (Received from Impulsive Buy reader Akiko)
Rating: 2 out of 5
Pros: Sugarfree. Cool looking can. Dragon would make a cool tattoo. Parties with fireworks and strippers.
Cons: Inconsistent cinnamon bite. Looks like it has a hard shell, but doesn’t have one. Parties with fully-clothed nuns. My inability to shoot fire from my mouth.