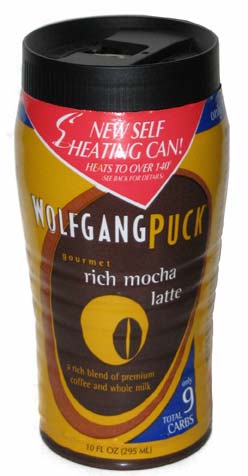 Sleepy, Marvo? A grande espresso will perk you right up. You don’t want to be sleepy at work. You’ll be less efficient, which may cause you to get fired, and you’ll end up selling crack to little kids, selling your body to old female Japanese tourists, or working at Wal-Mart with little benefits.

I’m not a coffee drinker, but ever since I picked up the Wolfgang Puck Rich Mocha Latte, Starbucks seems to be trying to lure me into one of their stores through telepathy. With 34 Starbucks locations within a ten mile radius of my apartment, their presence is very powerful.

Before trying the Wolfgang Puck Rich Mocha Latte, I’ve never had a regular cup of coffee, a latte, an espresso, a Frappuccino, a cappuccino, a macchiato, or whatever other coffee drinks that end with the letter “o.”

You want coffee! A delicious latte in a grande or tall size! You know you want it. Everyone else is doing it, so why aren’t you? All the cool kids are doing it. Don’t you want to be cool?

My guess is that when I picked it up, red flags and sirens went off at Starbucks headquarters in Seattle, although I think they went off not only because I picked up a non-Starbucks product, but also because I’m one type of a typical Starbucks customer.

I’m a young male professional, who dresses in a little too much Gap and Banana Republic. I’m also a go getter, with dreams of making it big in the real world, ending up with a two car garage house, a white picket fence, 2.5 kids, maybe a dog, and a wife who is not only successful in her own right, but also has a naughty side.

We’ve got hot barista girls ready to serve you whatever your heart desires. Some of them have tattoos on their lower back and piercings in places you can’t see, and we know how much you love women like that. If you come to Starbucks, they’ll smile at you, not because they’re told to by management, but because they WANT your hot body. 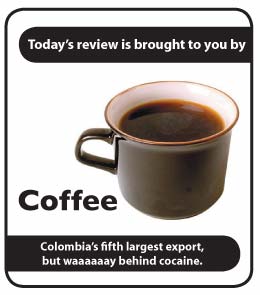 But like I said earlier, I’m not a coffee drinker. I think I feel this way because of all those years of smelling the coffee-stamped breaths of my elementary school teachers, who needed caffeine to help them be alert just in case I decided to either run with scissors, fingerpaint my face, or eat the paste.

Even after drinking the Wolfgang Puck Rich Mocha Latte, I don’t know if I’ll become a coffee drinker, because I wasn’t too impressed with it. It wasn’t bad, but for something that calls itself “rich,” it had a watery taste.

Probably the best thing about this product, was its self-heating can. According to the label, a chemical process heats up the inside of the can and the watery, rich mocha latte to over 140 degrees Fahrenheit (or 60 degrees Celsius for you Celsius fanatics).

With this chemical process, I ended up with was a latte that was not too hot, like Papa Bear’s porridge; not too cold, like Mama Bear’s porridge; but just right, like Baby Bear’s porridge. The self-heating can is definitely convenient for those on the go, those who don’t have time to wait in line at a Starbucks, or those who have to prevent little kids from running with scissors or eating the paste.

However, its taste will probably have people heading back to Starbucks and have Wolfgang Puck’s Iron Chef status taken away from him. As for myself, I’m still not a coffee drinker, so I hope that Starbucks will stop telepathically trying to convince me to be a customer.

Item: Wolfgang Puck Rich Mocha Latte
Purchase Price: $2.99 (10-ounces)
Rating: 2.5 out of 5
Pros: Self-heating can, which produced a not too hot, not too cold, but just right temperature. 100 calories. Hot barista girls at Starbucks.
Cons: Watery taste. Not very rich. Starbucks trying to telepathically lure me into one of their stores. Long lines at Starbucks.