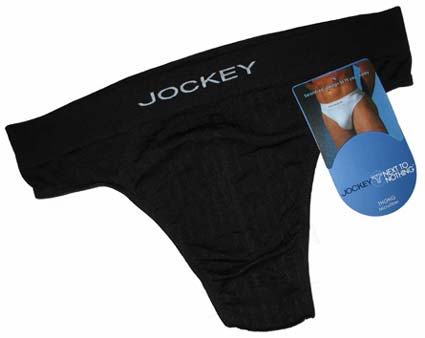 I think they look totally hot on women, but as for European male sunbathers and male strippers, not so much. You may think I’m a little biased about that because I’m straight, but I have female friends who also think men in thongs aren’t hot at all.

However, I think my female friends who think this way are in the minority, because for some reason, if you stick a bunch of women in a room with lots of alcohol, huge wads of one dollar bills, and tanned, oiled men in thongs, they go unbelievably crazy over the guys in thongs.

I want women to go unbelievably crazy over me and the only way I believe I can do this is to start wearing thongs. Now I’m usually a boxer or boxer brief kind of guy, depending on how much freedom on a particular day I want to give my “cucumber and tomatoes,” but maybe it was time for something different.

So I went to my local Jockey Store and picked up a Jockey Next to Nothing Thong, which is the significantly less fabric consuming, but almost equally priced, cousin of the Jockey Next to Nothing Boxer Brief, which I reviewed last year. When I went to the counter to pay for the thong, I asked the cute saleswoman if she likes guys who wear thongs. She looked at me weird, like I asked her an uncomfortable question, and then said she doesn’t like guys in thongs.

However, I think if you stuck her in a room with a bunch of other women, lots of alcohol, stacks of one dollar bills, and tanned, oiled men in thongs, she would say otherwise while licking whipped cream off of the pierced nipples of one of the thonged men.

Anyway, the first thing I did when I got home with my brand new thong was wash and dry it, just in case some other dude’s sperm kettle was in it.

To be honest, I should be used to having my underwear run up my ass. After all, I received a lot of wedgies growing up, and in those days I wore exclusively tighty-whiteys. If you’ve never experienced a tighty-whitey wedgie, you are either a fast runner or you were probably one of those people who gave kids like me wedgies.

Anyway, when I first put the thong on, it felt kind of good, but the soft microfiber material might’ve had something to do with that. The front felt like a tighty-whitey, while the back felt like I was being preparing for a sumo wrestling match. Also, I suddenly wished I either had a black bow tie around my neck or a fake rip-away policeman or fireman uniform.

After about an hour of wearing it, I got used to it and wearing the thong got comfortable, from the “crack cover” to the “taint topper” to the “chestnut roaster.” Even when I went running with them, it didn’t feel uncomfortable.

Despite the comfortable feeling, I don’t think I’ll be wearing a thong on a regular basis. First off, my semi-flat Asian ass doesn’t look very good in a thong. Also, I’m afraid of being caught with a whale tail.

So I guess I’ll have to find another way to get women to go unbelievably crazy over me. Too bad I don’t have a large room with lots of alcohol, stacks of one dollars bills, a tan, and an oily body.

Item: Jockey Next to Nothing Thong/Wearing a Thong
Price: $11.00 (on sale)
Purchased at: Jockey Store
Rating: 3.5 out of 5 (Jockey Next to Nothing Thong)
Rating: 3 out of 5 (Wearing a thong)
Pros: Microfiber is soft. The thong eventually got comfortable. I got used to the “crack cover” getting sucked in by my ass. Good “cucumber and tomatoes” support. Thongs on women.
Cons: Whale tail. My ass does not look good in a thong. Wedgies. Thongs on European male sunbathers.

47 thoughts to “Jockey Next to Nothing Thong/Wearing a Thong”