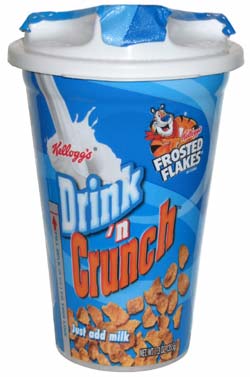 Recently, I picked up the Kellogg’s Frosted Flakes…

HEY MR. TAXI DRIVER! YOU LEARNED ENGLISH AS A SECOND LANGUAGE, SO WHY CAN’T YOU LEARN HOW TO DRIVE!?!

Since breakfast is a meal a lot of people skip, Kellogg’s is trying to get more people to eat breakfast by making it convenient to eat on our commute to work. So I’m just driving around with a Drink ‘n Crunch to see if if really is convenient. Fortunately, the Drink ‘n Crunch has an angled outer lip, which will help me see the road and it will fit into my…

HEY MR. FAST AND FURIOUS! THANKS FOR NOT USING YOUR BLINKER AND CUTTING ME OFF. BY THE WAY, YOUR MUFFLER MAKES YOUR CAR SOUND LIKE IT’S FARTING!

To prevent the cereal from getting soggy in the milk, each Drink ‘n Crunch consists of an inner cup, that holds the smaller than usual cereal and an outer cup, which holds the milk. Unfortunately, you must provide the milk. To pour in the milk, I had to separate the inner cup from the outer cup and pour the milk into the outer cup. There was a convenient level on the side of the outer cup that let me know how much milk…

OOOOH MR. SPINNING HUBCAPS AND THUMPING CAR STEREO SYSTEM! YOU COULD SPEND THE 30 DOLLARS ON SPINNING HUBCAPS, BUT COULDN’T SPEND SOME MONEY ON DRIVING LESSONS AND EARPLUGS FOR YOUR INFANT IN THE BACK SEAT!?!

After putting the inner cup back into the milk-filled outer cup, sort of like those Russian dolls, all that needed to be done was to pull back the foil lid and enjoy. The milk is dispensed through a small rectangular hole, which allows the milk to be consumed in small doses. I guess I now can fully appreciate…

Despite following the instructions on the packaging to shake the Drink ‘n Crunch gently to loosen the cereal, it had a hard time coming out. It was as frustrating as drunk dry heaving, except with the Drink ‘n Crunch I’m behind the wheel of a two ton automobile, while with drunk dry heaving, I’m behind a bunch of bushes. It’s definitely not good to be…

HEY! WATCH WHERE YOU’RE GOING, MR. DVD PLAYER IN THE DASHBOARD! UNLESS YOU’RE WATCHING THE ROAD IN FRONT OF YOU VIA YOUR DASHBOARD SCREEN, I’D SUGGEST YOU KEEP BOTH EYES ON THE ROAD, JACKASS!

…frustrated behind the wheel.

HEY MS. PUTTING ON MAKEUP WHILE DRIVING! STOP DRIFTING INTO MY LANE! YOU KNOW IT TAKES TWO HANDS TO DRIVE, NOT TWO KNEES!

As for the cereal itself, it was typical Frosted Flakes, when I could get it into my mouth. I ran out of milk before I ran out of cereal, which is the opposite of what happens when I eat milk and cereal in a bowl. However, despite the taste, the Kellogg’s Frosted Flakes Drink ‘n Crunch just wasn’t as convenient as it should’ve been.

Also, there are a lot of shitty drivers on the road.

Item: Kellogg’s Frosted Flakes Drink ‘n Crunch
Price: $1.89
Purchased at: 7-Eleven
Rating: 3 out of 10
Pros: Somewhat smart concept. Convenient level on the side to let you know how much milk to pour in.
Cons: Pricey, since it’s slightly cheaper than a whole box of cereal. Milk not included. Despite shaking it to loosen cereal, it still had a hard time coming out. Lip of container obstructed my view while consuming. Shitty drivers.