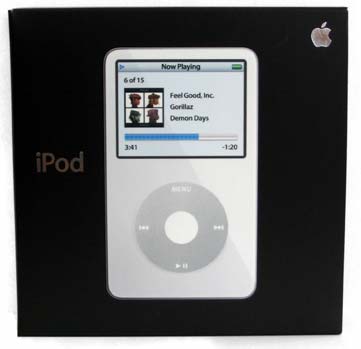 Oh yeah! I’d like to rub some EVOO all over you, baby!

I love my new iPod, not only because it can play videos, hold 7,500 songs, and carry my calendars and contacts, but also because it totally replaced my old Rachael Ray shrine.

If you saw my old Rachael Ray shrine, the first thing you would probably think to yourself is, “Damn! That Rachael Ray shrine must take a lot of time to set up before the ceremonial rubbing of EVOO all over the body can be started.”

Then there was the rosemary-scented candles and sage-scented incense. Then there was the bowl where I put the fresh herbs and spices into as an offering to the Rachael Ray shrine. Then I had to get a bottle of EVOO, which as I said before, was used to do the ceremonial rubbing of it all over my body. Finally, there was the DVD player and TV which played one of her DVDs in a continuous loop.

With my new iPod, I can get rid of some of these things. I can break up the collages into individual images and play them in a nice slideshow on my iPod, or with a special cable, I can watch the slideshow on my TV.

Maybe I should’ve gotten the 60GB iPod instead. 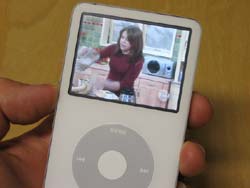 However, without all the episodes of 30 Minute Meals, I do have room for more Rachael Ray photos, like that sexy photoshoot she did for FHM. I got one word for that photoshoot…Yum-O. Also, I’ve added some scanned images of her from her cookbooks and her magazine called Everyday with Rachael Ray. How good is that?

The iPod’s screen is bright and sharp, and all the TV shows play smoothly. The 2.5-inch screen was small at first, but I got used to it. There are other features, like games, a stopwatch, and a screen lock, all of which I don’t really use. However, I do use the notes feature to carry Rachael recipes around.

Since my iPod has helped me condense my Rachael Ray shrine, I have some closet space again, which means I now don’t have to keep inflating and deflating the blow up doll I have with a picture of Rachael’s face taped to it. So now I won’t be out of breath when I do my ceremonial extra virgin olive oil body rubbing Rachael Ray chant, which goes like this:

“30 minute meals I will make. I preheat the oven so I don’t have to wait. Got my garbage bowl and EVOO. I’m ready to eat something that’s Yum-O!”

Despite how great my iPod is with condensing my Rachael Ray shrine so that it is good to go, I’ve had some problems with it. First, the iPod scratches too easily. It’s as fragile as Michael Jackson’s face and his will power around little boys. Although the scratches aren’t noticeable when I’m watching videos.

Another concern I have is the battery life when playing only videos. My iPod can play only videos for about two hours, which is enough for only five commercial-free episodes of $40 A Day. So unless I’m near an outlet, I can only get through half of the ceremonial EVOO body rubbing.

The rubbing of my nipples alone takes thirty minutes.

Item: 30GB Apple iPod (5th Generation)
Price: $299
Purchased At: Apple Store
Rating: 3.5 out of 5
Pros: It plays music and video. Bright and sharp screen. Thinner than my old iPod. A great Rachael Ray shrine replacement. Holds my calendars and contacts. Notes feature is great for carrying around Rachael Ray recipes. Ceremonial rubbing of EVOO all over my body.
Cons: Scratches damn easy. Not enough space for all the episodes of 30 Minute Meals. Battery life when playing video is short. Need to buy separate power adapter to plug into power outlet.